The Engineering of Sport 6 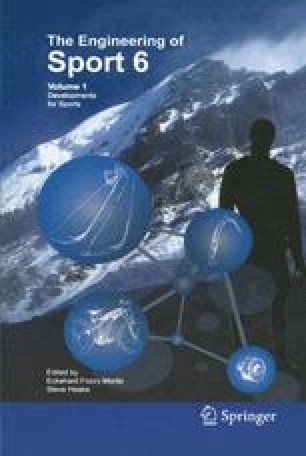 The aim of this research was to determine what effect an active damping tennis racket technology had on players suffering with symptoms of tennis elbow. The study was conducted to verify findings of previous research, which concluded that the symptoms of tennis elbow had been dramatically reduced by playing with a Head rackets containing the Head Chip system™ (Kotze et al. 2003). A similar study over an extended period was completed to further substantiate these findings and to test the improved generation of ‘Chip’ rackets. This study used two versions of the Head Protector Oversize tennis rackets; both containing piezo ceramic fibres integrated with the electronic Chip system™, but only half with the chip “active”, thus providing a control. The subjects were male and female experienced tennis players diagnosed with either acute or chronic tennis elbow. They were given unspecified rackets to facilitate a blind study, and the subjects’ elbow condition was medically assessed and recorded over an extended period of time. Results of the study indicated that for the players who were initially diagnosed with acute tennis elbow, a large improvement in their condition was recorded for those using the active rackets, whilst the players with the control rackets showed little improvement in their condition. Similar results were found for the players diagnosed with chronic tennis elbow although to a lesser extent; those using rackets with active chips showed an overall improvement, whilst the players with the control rackets again showed little sign of improvement. The results of the study have shown that an active damping technology, when applied to a tennis racket, can reduce the symptoms of both acute and chronic tennis elbow.

Radial Head Lateral Epicondylitis Tennis Elbow Tennis Racket Chip System
These keywords were added by machine and not by the authors. This process is experimental and the keywords may be updated as the learning algorithm improves.
This is a preview of subscription content, log in to check access.