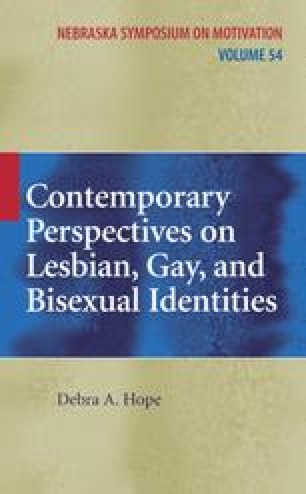 Sexual Stigma and Sexual Prejudice in the United States: A Conceptual Framework

In 1972, psychologist George Weinberg's book, Society and the Healthy Homosexual, introduced readers to a new term, homophobia, and to the then-novel idea that hostility to homosexuality, rather than homosexuality itself, posed a threat to mental health (Weinberg, 1972; see also Herek, 2004). The following year, the American Psychiatric Association's Board of Directors declared that homosexuality is not inherently associated with mental illness and voted to remove it from the Diagnostic and Statistical Manual of Mental Disorders, or DSM (Bayer, 1987; Minton, 2002). The American Psychological Association quickly endorsed the psychiatrists' action and further urged mental health professionals “to take the lead in removing the stigma of mental illness that has long been associated with homosexual orientations” (Conger, 1975, p. 633). Thus, a major cultural institution renounced its longstanding role in legitimating society's stigmatization of homosexuality just when the psychological...

Sexual Orientation Sexual Minority Hate Crime Policy Attitude Sexual Prejudice
These keywords were added by machine and not by the authors. This process is experimental and the keywords may be updated as the learning algorithm improves.
This is a preview of subscription content, log in to check access.