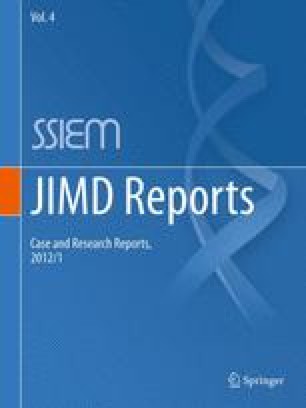 Neurodegeneration with Brain Iron Accumulation on MRI: An Adult Case of α-Mannosidosis

Case: A 34-year-old woman was referred to our hospital with progressive movement disorders and neurodegeneration with brain iron accumulation and enlargement of the frontal diploe on the MRI. Metabolic testing revealed that she had α-mannosidosis (AMD), a lysosomal storage disorder.

Discussion: The movement disorders we found in our patient have not been reported previously, but they are likely late symptoms of this progressive disorder. The iron deposits in the basal ganglia have also not been reported in AMD and are yet of unknown significance. Lysosomal storage disorders, such as AMD, should be considered in patients with progressive neurologic conditions and neurodegeneration with brain iron accumulation on MRI.

The authors would like to thank Marieke Sprengers for her helpful comments on the MRI-scan.

In patients with a progressive neurologic condition and features of iron depositions on the MRI also think of AMD.

Segment 1 shows the patient at rest. The typical coarse facial features are visible and there is mild dysarthria.

Segment 2 shows myoclonus of the hands (left>right) in rest.

Segment 3 shows the patient during extension of the arms and wrists, first both and then one arm at a time. During this segment there is mild dystonia and both positive and negative myoclonus on both arms.

Segment 4 shows ataxia when the patient moves her finger from her knee to her nose and back, on both arms. During the second part of this segment the patient attempts to hold up both arms in front of her chest with flexion in the elbows. Mild dystonia and positive and negative myoclonus can be noted.

Segment 5 shows the patient walking with a broad-based ataxic gait. Mild dystonia of the arms can be noted.

E Zoons: literature search, writing of the first draft, and revise the manuscript

This study was not sponsored.

Dr. de Koning was sponsored by Milupa Metabolics to visit the “40th European Metabolic Group Meeting” in Heidelberg, Germany, in May 2008 and by Swedish Orphan to attend a symposium titled “Treatment of Urea Cycle Defects” in 2009.

Dr. Tijssen reports no personal disclosures; however, the dystonia nurse working both in patient care and in the research group of which Dr. Tijssen is the principal investigator is supported by a grant from Ipsen Pharmaceuticals.