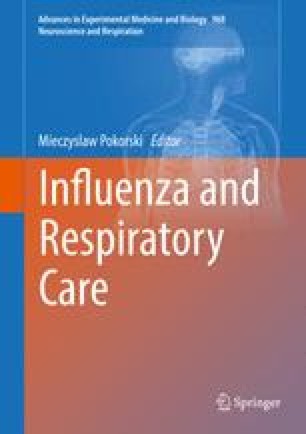 Influenza is an infectious disease caused by influenza A and B viruses. Children are the group which is the most exposed to influenza and influenza-like infections. They are considered as carriers of influenza infections in the population. In the epidemic season 2015/2016 more than 8000 samples were tested, of which over 30 % specimens were collected from patients aged 0–14 years. In 42.3 % cases the influenza or influenza-like viruses were confirmed. The most common subtype was A/H1N1/pdm09. Analysis of positive specimens was categorized into three smaller groups 0–4, 5–9, 10–14. Differences in the frequency of virus detections in younger age groups appeared. This study has shown that children are a very important group in the spread of the influenza virus in the population. A higher percentage of vaccinated children would decrease the number of infected patients in the whole population.

Influenza is a disease caused by viruses A, B, and C belonging to the family Orthomyxoviridae. Cases of infection with influenza type C are much rarer. Therefore, laboratory diagnostics of influenza viruses are based on the confirmation of the presence of A and B influenza viruses (Brydak 2012). The main symptoms of influenza infection are sudden onset of disease, fever, chills, cough, sore throat, muscle pain, headache, and general malaise. The course of influenza infection in children is further characterized by symptoms from the gastrointestinal tract. It is worth noting that the symptoms above mentioned are not specific to influenza infection, but also for infections caused by other respiratory viruses (influenza-like viruses), which makes the diagnosis difficult (WHO 2014).

Children are a group particularly affected by influenza virus infection. Their immune system is not yet fully formed. For this reason, children are considered a higher risk group and vaccination from the 6th month of life up to 18 years of age is recommended (Hallmann-Szelińska et al. 2015). Despite the recommendation presented at the beginning of 2015, vaccination coverage rate in Polish children amounts to merely 0.73 % (Epimeld 2016). This is outrageously low compared to the percentage of vaccinated children in other European countries.

The basic methods of detection of influenza viruses from material taken from a patient belong to the molecular biology. A quick diagnostic confirmation of the virus, especially in children, enables a rapid implementation of antiviral treatment, and thus reduces the chance of serious complications from influenza, including fatal course of disease.

In the influenza season 2015/2016, five deaths of children under the age of 14 years caused by influenza were reported (NIPH-NIH 2016). Children are exposed not only to influenza infection, but also to influenza-like viruses, which circulate at the same time, and resemble the influenza infection. The most frequently diagnosed influenza-like viruses include parainfluenza 1, 2, 3, human respiratory syncytial viruses A and B (RSV A, RSV B), human corona viruses 229E/NL63 and OC42 (hCoV), human rhinovirus (RV), human adenovirus (ADV), and human metapneumovirus (hMPV) (Brydak 2008).

The study protocol was approved by an institutional Ethics Committee and the study was conducted in accordance with the principles for biomedical human research as set by the Declaration of Helsinki.

The material for testing were swabs taken from the nose and throat, collected within the framework the non-sentinel and sentinel influenza surveillance programs (WHO 2009). There were 3376 specimens taken from children up to 14 years of age tested in the epidemic season 2015/2016 in Poland. The specimens were analyzed at the Department of Influenza Research, National Influenza Centre at National Institute of Public Health – National Institute of Hygiene in Warsaw, Poland, as well as in 16 Voivodeship Sanitary Epidemiological Stations throughout the country. The National Influenza Centre served as the reference laboratory. The patients were divided into three age groups: 0–4, 5–9, 10–14 years, according to the division introduced in the reporting system updated in 2014 (Bednarska et al. 2016).

For RNA isolation, Maxwell 16 Total Viral Nucleic Acid Purification Kit (Promega Corporation; Madison, WI) was used. The isolation was performed according to the instructions of the manufacturer from 200 μl of sample suspended in saline and RNA was eluted using 50 μl of RNase-free water.

Real-time PCR was performed to confirm the genetic material of influenza virus type A and B and the viral subtypes, using Light Cycler 2.0 System (Roche Diagnostics; Rotkreuz, Switzerland). The reaction was performed in capillaries with a volume of 20 μl. Primers and probes derived from the Influenza Reagent Resources (IRR) program operated by the Centers for Disease Control and Prevention (CDC) were used in the analysis. The reaction mixture included: buffer, BSA, MgSO4, RNase-free water, and the SuperScript III/Platinum Taq Mix (Invitrogen Life Technologies – Thermo Fisher Scientific; Carlsband, CA). Five microliters of RNA were added to each capillary tube. The positive control for the reactions were viruses included in the vaccine for the epidemic season 2015/2016: A/California/7/2009 (H1N1) pdm09, A/Switzerland/9715293/2013, and B/Phuket/3073/2013. The negative control was the RNase-free water provided in the kit. Before the amplification process, cDNA was subjected to a reverse transcription (30 min 50 °C). The DNA was subjected to a process of initiation (1 cycle 95 °C for 2 min), followed by 45 cycles of amplification: denaturation at 95 °C for 15 s, annealing at 55 °C for 30 s, and elongation at 72 °C for 20 s.

Influenza virus A predominated in the epidemic season 2015/2016 in Poland, with the dominant subtype A/H1N1/pdm09. Predomination of this virus in Poland is in line with similar observations noted in other European countries (ECDC 2016). The results also confirm the frequent presence of influenza and influenza-like viruses in children aged 0–14 years. In addition, in the youngest age-group of 0–4 years, the presence of also virus type B was confirmed, which shows that young children have a poorly developed immune system, making them more vulnerable to disease. Large gatherings of people contribute to influenza infections. Children due to daily stays in kindergartens and schools are particularly susceptible to infection and also are carriers of infection (Hallmann-Szelińska et al. 2015, 2016). The RSV virus is a leading cause of respiratory tract infections in infants. This infection usually runs a mild course in older children and adults, but is severe in infants who often require hospitalization (Brydak 2008).

Due to an extremely low percentage of vaccinated children, the number of cases of influenza steadily increases from season to season. This widely spreading tendency could be overcome through the implementation of vaccination against influenza from the sixth month of age, which is recommended by the Advisory Committee on Immunization Practices (ACIP) (CDC 2016) and by other associations, including the American Academy of Pediatrics (AAP 2016). Unfortunately, few parents undertake a decision to vaccinate their children, which in case of infection may end up with life-threatening complications. The same holds true for vaccination of pregnant women, which actually provides immunization for both mother and child. A confirmed case of influenza in a 14-day old child we observed in the present study pointedly shows that the mother was not vaccinated during pregnancy, although such vaccinations are recommended in Poland in the Preventive Vaccination Plan.

This work was funded by NIPH- NIH thematic subject 5/EM.1. The authors’ thanks go to physicians and employees of Sanitary Epidemiological Stations participating in sentinel and non-sentinel programs for their input into the influenza surveillance in Poland.