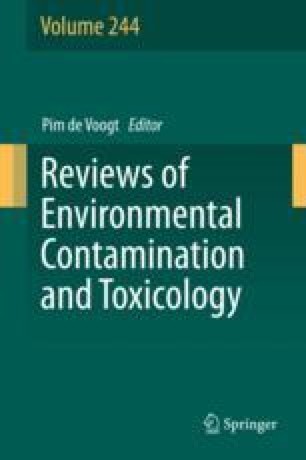 A Review of the Environmental Degradation, Ecotoxicity, and Bioaccumulation Potential of the Low Molecular Weight Polyether Polyol Substances

“Polyalkylene glycol” is the name given to a broad class of synthetic organic chemicals which are produced by polymerization of one or more alkylene oxide (epoxide) monomers, such as ethylene oxide (EO) and propylene oxide (PO), with various initiator substances which possess amine or alcohol groups. A generalization of this polymerization reaction is illustrated in Fig. 1.

The online version of this chapter (doi:  10.1007/398_2017_2) contains supplementary material, which is available to authorized users.

The authors are grateful to Monika Leutbecher of Covestro Deutschland AG, Gitta Egbers of BASF Polyurethanes GmbH and Joerg Palmersheim, European Isocyanate and Polyols Producer Association (ISOPA) for their contributions to the discussion, and to Yunzhou Chai for performing the OASIS metabolism predictions. The authors gratefully acknowledge the many significant contributions of Dr. Urs Friederich (formerly Dow Europe GmbH) to the early development and drafting of this review. The authors are grateful to ISOPA for financial support. Views and opinions expressed in this paper are those of the authors and not necessarily of ISOPA.

T. Schupp worked for BASF, a Polyether-polyol producer, until 2012.

B.T.A. Bossuyt is working for Huntsman, a Polyether-polyol producer.

This work was sponsored by ISOPA, the European Isocyanate, and Polyol Producer Association. The authors declare that all data of the PEPOs available to them are evaluated and presented in good faith. The views presented are those of the authors and do not necessarily coincide with the views of ISOPA.

Prediction of Biodegradation Metabolites of Polyols

Software: Prediction software OASIS Catalogic (v5.11.16) was selected. The Kinetic 301F Model (v12.15) implemented in OASIS Catalogic was deemed appropriate for this study. The model was developed based on a training database of catabolic pathways for more than 551 organic compounds. Training set data and expert knowledge were used to determine the principal transformations and to train the system to simulate aerobic catabolism of training chemicals. The documented pathways of microbial catabolism were collected from scientific papers, monographs, and databases accessible over the Internet.

Results: Potential metabolites from aerobic biodegradation of the seven representative molecular structures of the polyols are summarized in Tables 21–27. Predicted quantities, octanol-water partition coefficient (logKow) values, and the predicted mode-of-action (predicted using the Verhaar Scheme (modified) and OASIS®) of the potential metabolites as well as their parent compounds are also shown in Tables 21–28. Predicted metabolites have logKow values similar or less than their corresponding parent compounds. As far as the ecotoxicity and bioaccumulation potential of these polyols and their metabolites correlate with their logKow, the metabolites are not expected to be more toxic or more bioaccumulative than their parent compounds. However, it cannot be excluded that EDA and TDA-based PEPOs might release the core substance (initiator), which shows a higher ecotoxicity than the respective PEPO. Additionally, after mode of action prediction, a number of the metabolites fall into the categories “Reactive unspecified” or “Narcotic amine”; compounds that fall into these categories are expected to exert toxicity greater than expected via non-polar narcosis.

Predicted quantities and logKow values for metabolites of SOR + 6PO (a)

Predicted quantities and logKow values for metabolites of SOR + 6PO (b)

Predicted quantities and logKow values for metabolites of TDA + 3PO (a)

Predicted quantities and logKow values for metabolites of TDA + 3PO (b)