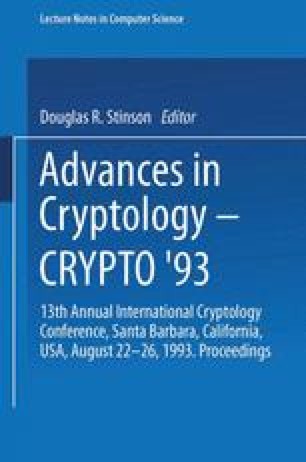 A new identification scheme based on syndrome decoding

Zero-knowledge proofs were introduced in 1985, in a paper by Goldwasser, Micali and Rackoff ([6]). Their practical significance was soon demonstrated in the work of Fiat and Shamir ([4]), who turned zero-knowledge proofs of quadratic residuosity into efficient means of establishing user identities. Still, as is almost always the case in public-key cryptography, the Fiat-Shamir scheme relied on arithmetic operations on large numbers. In 1989, there were two attempts to build identification protocols that only use simple operations (see [11,10]). One appeared in the EUROCRYPT proceedings and relies on the intractability of some coding problems, the other was presented at the CRYPTO rump session and depends on the so-called Permuted Kernel problem (PKP). Unfortunately, the first of the schemes was not really practical. In the present paper, we propose a new identification scheme, based on error-correcting codes, which is zero-knowledge and is of practical value. Furthermore, we describe several variants, including one which has an identity based character. The security of our scheme depends on the hardness of decoding a word of given syndrome w.r.t. some binary linear error-correcting code.

Cryptographic Hash Function Random Word Simplex Code Patentable Subject Matter Syndrome Decode
These keywords were added by machine and not by the authors. This process is experimental and the keywords may be updated as the learning algorithm improves.