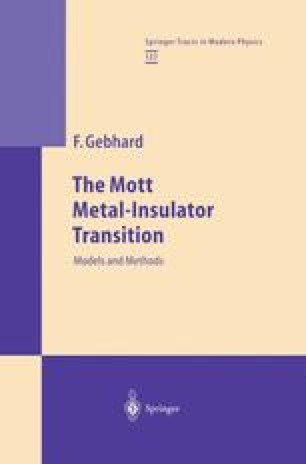 In the first section we specify an insulator as a substance with a vanishing electrical conductivity in a (weak) static electrical field at zero temperature. The transport of electrical charge in the solid state is provided by electrons that are subjected to the Coulomb interaction with the ions and the other electrons. Correspondingly, in the first category of insulators we find band, Peierls, and Anderson insulators, which can be understood in terms of single electrons that interact with the electrostatic field of the ions. Mott insulators constitute the second category, where the insulating behavior is understood as a cooperative many-electron phenomenon. In the absence of electron pairing an insulator may be characterized by a gap for charge excitations into states in which the wave functions of the excitations spatially extend over the whole specimen (gap criterion). This zero-temperature gap sets an energy scale that allows us to distinguish in practical terms between good conductors (“metals”) and bad conductors (“insulators”) at finite temperature.

Quantum Phase Transition Insulator Transition Mott Transition Mott Insulator Band Insulator
These keywords were added by machine and not by the authors. This process is experimental and the keywords may be updated as the learning algorithm improves.
This is a preview of subscription content, log in to check access.