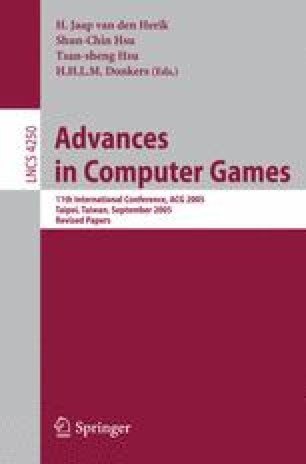 A New Family of k-in-a-Row Games

This paper contains three contributions. First, it introduces a new family of k-in-a-row games, Connect(m,n,k,p,q). In Connect(m,n,k, p,q), two players alternately place p stones on an m ×n board in each turn, except for the start when the first player places q stones at her first move. The player who first obtains k consecutive stones of her own first wins. The traditional game five-in-a-row, also called Go-Moku, in the free style is Connect(15,15,5,1,1). For brevity, Connect(k,p,q) denotes the game Connect(∞,∞,k,p,q), played on infinite boards.

Second, this paper analyzes the characteristics of these games, especially for the fairness. In the analysis of fairness, we first exclude the ones which are apparently unfair or solved. Then, for the rest of games, we argue that p=2q is a necessary condition for fairness in the sense that one player always has q more stones than the other after making a move. Among these games, Connect(6,2,1) is most interesting to this paper and is named Connect6.

Third, this paper proposes a threat-based strategy to play Connect(k,p,q) games and implements a computer program for Connect6, based on the strategy. In addition, this paper also illustrates a new null-move search approach by solving Connect(6,2,3) where the first player wins. The result also hints that for Connect6 the second player usually should not place the initial two stones far away from the first stone played by the first player.

Board Size Winning Strategy Empirical Experiment Move Node Large Board
These keywords were added by machine and not by the authors. This process is experimental and the keywords may be updated as the learning algorithm improves.
This is a preview of subscription content, log in to check access.