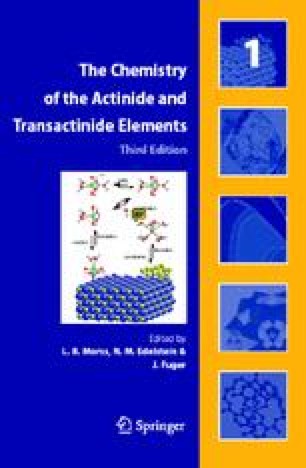 The discovery of einsteinium, element 99, came about during the analyses of nuclear products produced in and then recovered from test debris following a thermonuclear explosion (weapon test device, ‘Mike’, November 1952) at Eniwetok Atoll in the Pacific Ocean. The uranium present in this device was subjected to a very intense neutron flux (integrated fluence of about 1024 neutrons) in an extremely short time frame (few nanoseconds), which allowed a large number of multiple neutron captures with a minimal degree of decay of the products formed. Nuclei were formed with usually high neutron/proton ratios (very ‘heavy’ uranium isotopes), which then rapidly beta-decayed into new, transuranium isotopes through element 100. Scientists from several U.S. Government laboratories separated and analyzed extensively the debris samplings in the following weeks. From these investigations came the discovery and identification of einsteinium and fermium. The first element was named in honor of Albert Einstein, and assigned the symbol, E (later changed to the current symbol, Es). Additional details and discussions about the discovery of this element and the scientists involved are given in several references (Thompson et al., 1954; Ghiorso et al., 1955; Fields et al., 1956; Hyde et al., 1964; Seaborg and Loveland, 1990).

Subsequently, einsteinium has been produced in accelerator targets, and in reactors via successive neutron captures, starting with targets of plutonium or higher actinides. The first macroscopic and weighable quantities of einsteinium (few hundredths of a microgram of 253Es) were obtained in 1961. Today, up to ~2 mg can be present in special high-flux isotope reactor targets at the time of release from a reactor.

The transplutonium elements, where einsteinium is the fifth, have chemistries similar to those of the lanthanide elements, especially in their ionic states and in compounds. In essence, elements in the series sequentially add one f-electron in progressing to higher atomic numbers. Einsteinium is therefore an f-electron element, and its 5f electrons are considered fully localized, as opposed to those in the protactinium through plutonium grouping.

American Chemical Society Einsteinium Metal Trivalent Metal High Atomic Number Bonding Electron
These keywords were added by machine and not by the authors. This process is experimental and the keywords may be updated as the learning algorithm improves.
This is a preview of subscription content, log in to check access.