Oceans and Health: Pathogens in the Marine Environment 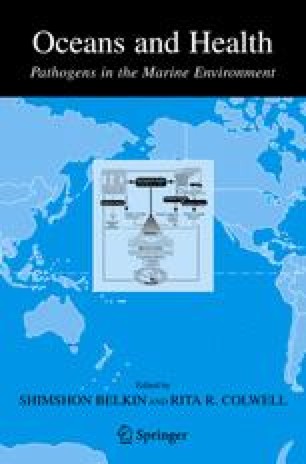 Oceans and Health: Pathogens in the Marine Environment pp 133-142 | Cite as

Survival of Viruses in the Marine Environment

It has been well established that human pathogenic viruses may be transmitted through the marine environment due to the release of sewage by polluted rivers, outfalls, or release from vessels. These wastes contain human enteric viruses, which if ingested, or in some cases inhaled, can cause a wide variety of illnesses. Their ability to be transmitted by this route is because of their capability to remain infectious long enough in the marine environment to come in contact with a susceptible host. Transmission routes may be fairly direct, such as ingested of contaminated seawater by a swimmer, or more complex by prolonged survival in sediments which are later resuspended and accumulated in shellfish during feeding. The virus is then transmitted during consumption of the shellfish. To understand the potential for human enteric virus transmission through the marine environment numerous studies have been conducted on factors which influence their persistence in this environment (Table 6.1). This reviewfocuses on factors that could play a role in the survival of human pathogenic viruses in the marine environment.

Humic Acid Marine Environment Natural Water Antiviral Activity Estuarine Sediment
These keywords were added by machine and not by the authors. This process is experimental and the keywords may be updated as the learning algorithm improves.
Download to read the full chapter text