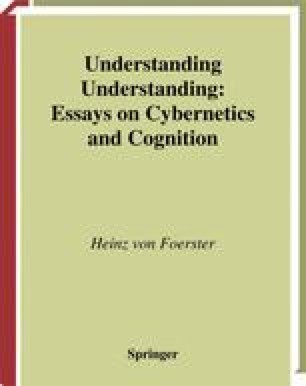 Stable Behavior Mathematical Biophysics Behavior Figure Logical Calculus Notational Abbreviation
These keywords were added by machine and not by the authors. This process is experimental and the keywords may be updated as the learning algorithm improves.

A seed, alas, not yet a flower, for Jean Piaget to his 80th birthday from Heinz, von Foerster with admiration and affection.

This contribution was originally prepared for and presented at the University of Geneva on June 29, 1976, on occasion of Jean Piaget’s 80th birthday. The French version of this paper appeared in Hommage a Jean Piaget: Epistémologie génétique et équilibration. B. Inhelder, R. Garcia, J. Voneche (eds.), Delachaux et Niestle Neuchatel (1977).