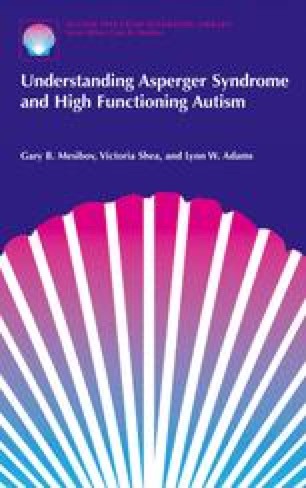 Beginning in the early 1940s and continuing to the present, studies of HFA and AS have increased our understanding in a parallel fashion to the development of knowledge in the field of autism in general. Although they were not familiar with one another’s work, Kanner and Asperger described many similar and overlapping characteristics. Later investigations analyzed similarities and differences between these descriptions and also have looked at the overlap between both of them and related conditions like schizoid personality disorders or learning and attention problems. The work of Lorna Wing in the 1980s has been instrumental in highlighting AS and its relationship to high functioning autism.

Current researchers continue to build on the strong foundation that has been provided. The result has been a dramatic increase in our understanding of high functioning people with autism. The distinction between autism and AS, however, remains unclear and unresolved. Current research continues to focus on the question of whether HFA and AS should be considered as separate conditions. With this historical background, we will turn to what has been learned about the people who have been identified with these conditions.

Personality Disorder Asperger Syndrome High Functioning Autism School Difficulty Childhood Schizophrenia
These keywords were added by machine and not by the authors. This process is experimental and the keywords may be updated as the learning algorithm improves.
This is a preview of subscription content, log in to check access.