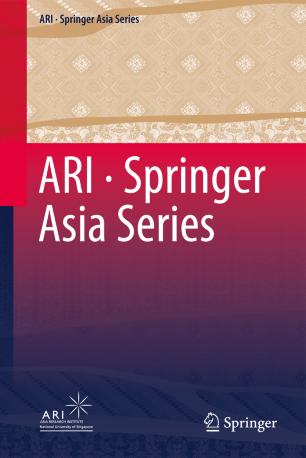 The ARI-Springer Asia series publishes new, field-defining research on the themes of Cities, Migration and Religion in the Asian region. The Asia Research Institute (ARI), which coordinates the series, is a university-level inter-disciplinary research initiative of the National University of Singapore, and an international hub for research on Asia. The three themes of the series correspond to three of ARI’s research clusters, namely Asian Urbanisms, Asian Migration, and Religion and Globalisation. ARI is networked with prominent scholars of Asia in other leading universities and research centres.

The books published in the series to date reflect the inter-disciplinary ethos of ARI with contributions from leading scholars in history, anthropology, geography, demography, and sociology, and reaching, geographically, across East, Southeast and South Asia. Methodologically and analytically, the studies draw on innovative data analyses, primary fieldwork, as well as archival research. ARI’s partnership with Springer in this book series offers a peer-refereed avenue for the publication of exciting new scholarship on Asia, ensuring that this scholarship is readily and widely available worldwide to institutions as well as individual scholars.

Religion Section Section editors: Kenneth Dean, National University of Singapore. Associate editors: Nico Kaptein, Leiden University; Joanne Waghorne, Syracuse University; R. Michael Feener, Oxford University. Religion is a key aspect of life across Asia. Indeed, Asia has some of the largest concentrated communities of adherents of particular religions, such as Islam, Buddhism and Hinduism. At the same time, traditional religious communities, forms, structures and identities are being influenced and reshaped by the forces of capitalism, secular modernity, sectarian negotiations, and transnationalism. Similarly, Asian diasporic communities balance an adherence to religious traditionalism with an open-ness to secularism and religious conversion. The Religion section of the series welcomes manuscripts that document and theorise these multifarious changes in religious constituencies and identities.

Migration Section Section editor: Brenda Yeoh, National University of Singapore. Associate editors: Richard Bedford, Auckland University of Technology; Xiang Biao, Oxford University; Rachel Silvey, University of Toronto. Across all the countries of Asia, migration has had a long and complex history. In Asia today, migration continues to be one of the most important and influential phenomena with varied and far-reaching consequences. Current scholarship has responded with new themes, establishing new sites of study, and creating new inter-disciplinary approaches in the extensive and myriad field of migration studies, including multiple and reverse migrations, diversity, cultural negotiations, local impact, and public policy. The Migration section in this series offers a scholarly venue for exciting new work on migration in Asia.

Cities Section Section editor: Michael Douglass, National University of Singapore. Associate editors: Mee Kam Ng, Chinese University of Hongkong; Jeff Hou, University of Washington. Like their counterparts everywhere, Asian cities have experienced many significant ramifications of globalisation, including rising tensions between rural and urban areas, rapid expansion and in migration, housing challenges, megaprojects, and all the socio-cultural problems associated with these and other factors. In addition, because of the compressed timeframe during which much of this has happened in Asia, and because of its particular historical, political, economic, social and cultural conditions, questions of sustainability and the larger ecosystem of urban living have moved very much into the forefront. The Cities section will offer a forum for a wide range of scholars exploring environmental, social, and cultural issues relevant to Asian cities. Individual studies of particular cities as well as comparative and thematic approaches are welcome.