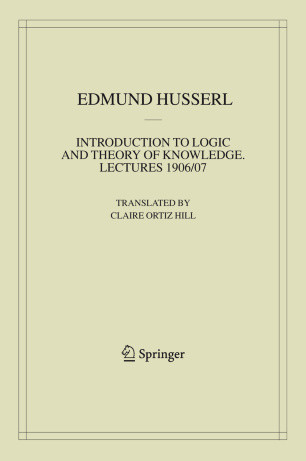 Edmund Husserl (1859 - 1938) is one of the most influential philosophers of this century. Among those influenced by his transcendental phenomenology are thinkers as diverse as Max Scheler, Martin Heidegger, Hans-Georg Gadamer, Jean-Paul Sartre, Maurice Merleau-Ponty, Aron Gurwitsch, Alfred Schutz and Helmuth Plessner. Springer Science + Business Media B.V. is therefore proud to publish not only Husserl's Complete Works, the Husserliana: being critical and annotated re-editions of works that appeared during Husserl's life, together with additions and relevant texts from his Nachlaß, lecture notes with subsequent additions, and the so-called 'monologische Forschungsmanuskripte', which Husserl did not mean to publish, but which contain essential material for a clear and complete understanding of his thought. There are also translations into English of his major books, the Husserl Collected Works, and material essential to a clear understanding of his thought that takes into account its evolution and enormous scope, the Dokumente. The  Materialien series will publish reliable transcriptions of unpublished manuscript. There is a journal devoted to the elucidation of Husserl's thought and to phenomenology in general: Husserl Studies.

Edited under the auspices of the Husserl-Archives, Louvain, Belgium.