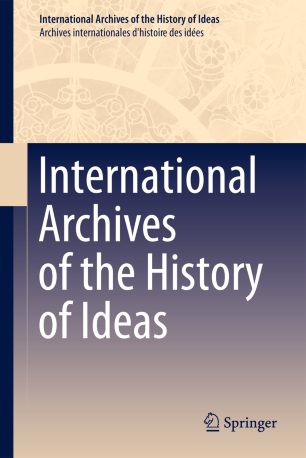 International Archives of the History of Ideas/Archives internationales d'histoire des idées is a series which publishes scholarly works on the history of ideas in the widest sense of the word. It covers history of philosophy, science, political and religious thought and other areas in the domain of intellectual history. The chronological scope of the series extends from the Renaissance to the Post-Enlightenment. Founded in 1963 by R.H. Popkin and Paul Dibon, the International Archives of the History of Ideas/Archives internationales d’histoire des idées publishes, edits and translates sources that have been either unknown hitherto, or unavailable, and publishes new research in intellectual history, and new approaches within the field. The range of recent volumes in the series includes studies on skepticism, astrobiology in the early modern period, as well as translations and editions of original texts, such as the Treatise of the Hypochondriack and Hysterick Diseases (1730) by Bernard Mandeville.