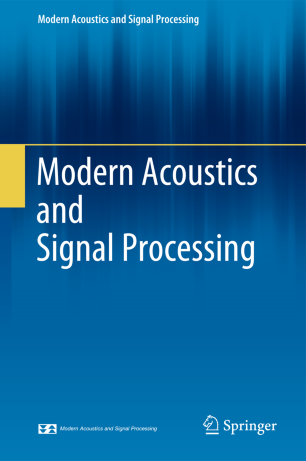 Given the importance of acoustics to modern science, industry, and human welfare Springer presents this series of scientific literature. The series of monographs and reference books is intended to cover all areas of today’s acoustics as an interdisciplinary field.

In the popular mind, the term “acoustics” refers to the properties of a room or other environment – the acoustics of a room are good or the acoustics are bad. But as understood in the professional acoustical societies of the world, such as the highly influential Acoustical Society of America, the concept of acoustics is much broader. Of course, it is concerned with the acoustical properties of concert halls, classrooms, offices, and factories - a topic generally known as architectural acoustics, but it also is concerned with vibrations and waves too high or too low to be audible. Acousticians employ ultrasound in probing the properties of materials, or in medicine for imaging, diagnosis, therapy, and surgery. Acoustics includes infrasound - the wind driven motions of skyscrapers, the vibrations of the earth, and the macroscopic dynamics of the sun. Acoustics studies the interaction of waves with structures, from the detection of submarines in the sea to the buffeting of spacecraft. The scope of acoustics ranges from the electronic recording of rock and roll and the control of noise in our environments to the inhomogeneous distribution of matter in the cosmos. Acoustics extends to the production and reception of speech and to the songs of humans and animals. It is in music, from the generation of sounds by musical instruments to the emotional response of listeners. Along this path, acoustics encounters the complex processing in the auditory nervous system, its anatomy, genetics, and physiology – perception and behavior of living things. Acoustics is a practical science, and modern acoustics is so tightly coupled to digital signal processing that the two fields have become inseparable. Signal processing is not only an indispensable tool for synthesis and analysis, it informs many of our most fundamental models for how acoustical communication systems work.
We expect that scientists, engineers, and graduate students will find the books in Modern Acoustics and Signal Processing useful in their research, teaching and studies.