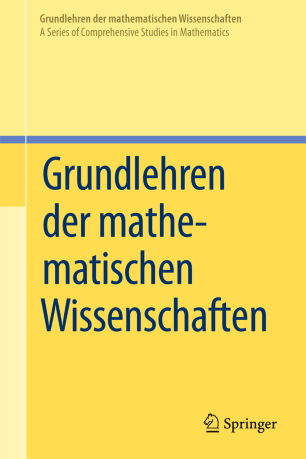 A Series of Comprehensive Studies in Mathematics

Grundlehren der mathematischen Wissenschaften (subtitled Comprehensive Studies in Mathematics), Springer’s first series in higher mathematics, was founded by Richard Courant in 1920. It was conceived as a series of modern textbooks. A number of significant changes appear after World War II. Outwardly, the change was in language: whereas most of the first 100 volumes were published in German, the following volumes are almost all in English. A more important change concerns the contents of the books. The original objective of the Grundlehren had been to lead readers to the principal results and to recent research questions in a single relatively elementary and accessible book. Good examples are van der Waerden’s 2-volume Introduction to Algebra or the two famous volumes of Courant and Hilbert on Methods of Mathematical Physics.

Today, it is seldom possible to start at the basics and, in one volume or even two, reach the frontiers of current research. Thus many later volumes are both more specialized and more advanced. Nevertheless, most volumes of the series are meant to be textbooks of a kind, with occasional reference works or pure research monographs. Each book should lead up to current research, without over-emphasizing the author’s own interests. Proofs of the major statements should be enunciated, however the presentation should remain expository. Examples of books that fit this description are Maclane's  Homology, Siegel & Moser on Celestial Mechanics, Gilbarg & Trudinger on Elliptic PDE of Second Order, Dafermos's Hyperbolic Conservation Laws in Continuum Physics ... Longevity is an important criterion: a GL volume should continue to have an impact over many years.Topics should be of current mathematical relevance, and not too narrow.

The tastes of the editors play a pivotal role in the selection of topics.

Authors are encouraged to follow their individual style, but keep the interests of the reader in mind when presenting their subject. The inclusion of exercises and historical background is encouraged.

The GL series does not strive for systematic coverage of all of mathematics. There are both overlaps between books and gaps. However, a systematic effort is made to cover important areas of current interest in a GL volume when they become ripe for GL-type treatment.

As far as the development of mathematics permits, the direction of GL remains true to the original spirit of Courant. Many of the oldest volumes are popular to this day and some have not been superseded. One should perhaps never advertise a contemporary book as a classic but many recent volumes and many forthcoming volumes will surely earn this attribute through their use by generations of mathematicians.