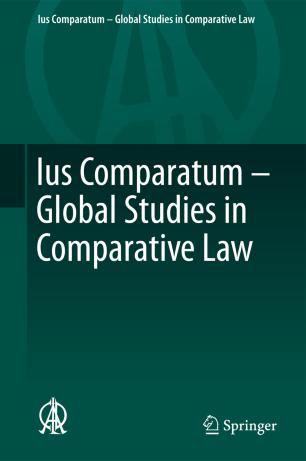 As globalization proceeds, the significance of the comparative approach in legal scholarship increases. The IACL / AIDC with almost 800 members is the major universal organization promoting comparative research in law and organizing congresses with hundreds of participants in all parts of the world. The results of those congresses should be disseminated and be available for legal scholars in a single book series which would make both the Academy and its contribution to comparative law more visible. The series aims to publish the scholarship emerging from the congresses of IACL / AIDC, including: 1. of the General Congresses of Comparative Law, which take place every 4 years (Brisbane 2002; Utrecht 2006, Washington 2010, Vienna 2014, Fukuoka 2018 etc.) and which generate (a) one volume of General Reports edited by the local organizers of the Congress; (b) up to 30 volumes of selected thematic reports dealing with the topics of the single sections of the congress and containing the General Report as well as the National Reports of that section; these volumes would be edited by the General Reporters of the respective sections; 2. the volumes containing selected contributions to the smaller (2-3 days) thematic congresses which take place between the International Congresses (Mexico 2008; Taipei 2012; Montevideo 2016 etc.); these congresses have a general theme such as “Codification” or “The Enforcement of Law” and will be edited by the local organizers of the respective Congress. All publications may contain contributions in English and French, the official languages of the Academy.