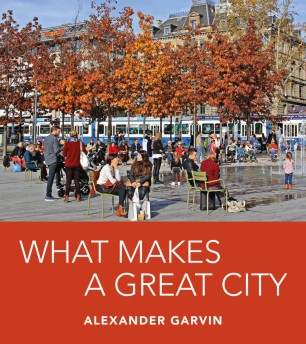 What Makes a Great City

What makes a great city? Not a good city or a functional city but a great city. A city that people admire, learn from, and replicate. City planner and architect Alexander Garvin set out to answer this question by observing cities, largely in North America and Europe, with special attention to Paris, London, New York, and Vienna.
For Garvin, greatness is not just about the most beautiful, convenient, or well-managed city; it isn’t even about any “city.” It is about what people who shape cities can do to make a city great. A great city is not an exquisite, completed artifact. It is a dynamic, constantly changing place that residents and their leaders can reshape to satisfy their demands. While this book does discuss the history, demographic composition, politics, economy, topography, history, layout, architecture, and planning of great cities, it is not about these aspects alone. Most importantly, it is about the interplay between people and public realm, and how they have interacted throughout history to create great cities.
To open the book, Garvin explains that a great public realm attracts and retains the people who make a city great. He describes exactly what the term public realm means, its most important characteristics, as well as providing examples of when and how these characteristics work, or don’t. An entire chapter is devoted to a discussion of how particular components of the public realm (squares in London, parks in Minneapolis, and streets in Madrid) shape people’s daily lives. He concludes with a look at how twenty-first century initiatives in Paris, Houston, Atlanta, Brooklyn, and Toronto are making an already fine public realm even better—initiatives that demonstrate what other cities can do to improve.

This volume will help readers understand that any city can be changed for the better and inspire entrepreneurs, public officials, and city residents to do it themselves.