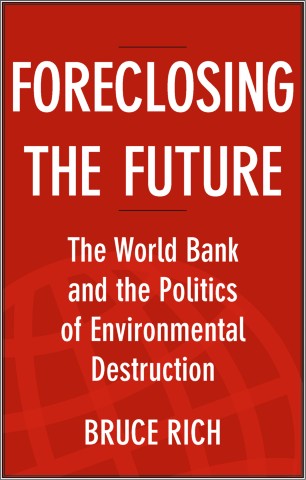 The World Bank and the Politics of Environmental Destruction

World Bank President Jim Yong Kim has vowed that his institution will fight poverty and climate change, a claim that World Bank presidents have made for two decades. But if worldwide protests and reams of damning internal reports are any indication, too often it does just the opposite. By funding development projects and programs that warm the planet and destroy critical natural resources on which the poor depend, the Bank has been hurting the very people it claims to serve. What explains this blatant contradiction?

If anyone has the answer, it is arguably Bruce Rich—a lawyer and expert in public international finance who has for the last three decades studied the Bank’s institutional contortions, the real-world consequences of its lending, and the politics of the global environmental crisis. What emerges from the bureaucratic dust is a disturbing and gripping story of corruption, larger-than-life personalities, perverse incentives, and institutional amnesia. The World Bank is the Vatican of development finance, and its dysfunction plays out as a reflection of the political hypocrisies and failures of governance of its 188 member countries.

Foreclosing the Future shows how the Bank’s failure to address the challenges of the 21st Century has implications for everyone in an increasingly interdependent world. Rich depicts how the World Bank is a microcosm of global political and economic trends—powerful forces that threaten both environmental and social ruin. Rich shows how the Bank has reinforced these  forces, undercutting the most idealistic attempts at alleviating poverty and sustaining the environment, and damaging the lives of millions. Readers will see global politics on an increasingly crowded planet as they never have before—and come to understand the changes necessary if the World Bank is ever to achieve its mission.

Bruce Rich is lawyer who has worked for three decades with national environmental organizations. He is an expert on public international finance and the environment. He received the United Nations Global 500 Award for environmental achievement for his research and advocacy concerning multilateral development banks. He is the author of Mortgaging the Earth and To Uphold the World, as well as articles in publications including The Financial Times, The Ecologist, and Environmental Forum, the policy journal of the Environmental Law Institute.