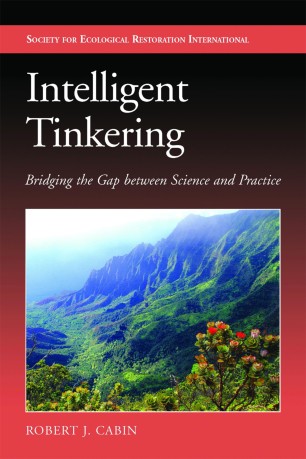 Bridging the Gap between Science and Practice

Robert J. Cabin uses the restoration of tropical dry forestland in Hawaii as an in-depth case study to investigate the scientific, practical, and philosophical issues associated with performing ecological restoration in the messy real world.

Interweaving entertaining narratives of his own on-the-ground experiences as a practicing restorationist with reflections about his scientific training and background, Cabin explores the relationship between science and practice in ecological restoration. He observes that because restoration can be complex and value-driven, its implementation often turns out to be as much interdisciplinary art as hard science. Despite the often distinct cultures and methodologies of scientists and practitioners, Cabin shows how each has a vital role in effective restoration and offers suggestions for improving working relationships.

One approach he advocates is what he calls "intelligent tinkering," after the work of Aldo Leopold. In this model, practitioners employ the same kind of careful but informal trial-and-error strategy followed by such groups as indigenous peoples and hobbyist mechanics. Cabin illustrates the power of intelligent tinkering using examples from his own work and other restoration projects.

The gap between science and practice is not unique to ecological restoration; it is a widespread problem across all fields of applied science. Written in a clear and engaging style, Intelligent Tinkering offers an insightful look at the underlying causes of the problem, along with invaluable suggestions for addressing it.