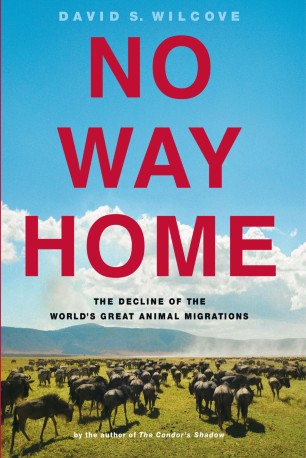 The Decline of the World’s Great Animal Migrations

Animal migration is a magnificent sight: a mile-long blanket of cranes rising from a Nebraska river and filling the sky; hundreds of thousands of wildebeests marching across the Serengeti; a blaze of orange as millions of monarch butterflies spread their wings to take flight. Nature’s great migrations have captivated countless spectators, none more so than premier ecologist David S. Wilcove. In No Way Home, his awe is palpable—as are the growing threats to migratory animals.

We may be witnessing a dying phenomenon among many species. Migration has always been arduous, but today’s travelers face unprecedented dangers. Skyscrapers and cell towers lure birds and bats to untimely deaths, fences and farms block herds of antelope, salmon are caught en route between ocean and river, breeding and wintering grounds are paved over or plowed, and global warming disrupts the synchronized schedules of predators and prey. The result is a dramatic decline in the number of migrants.

Wilcove guides us on their treacherous journeys, describing the barriers to migration and exploring what compels animals to keep on trekking. He also brings to life the adventures of scientists who study migrants. Often as bold as their subjects, researchers speed wildly along deserted roads to track birds soaring overhead, explore glaciers in search of frozen locusts, and outfit dragonflies with transmitters weighing less than one one-hundredth of an ounce.

Scientific discoveries and advanced technologies are helping us to understand migrations better, but alone, they won’t stop sea turtles and songbirds from going the way of the bison or passenger pigeon. What’s required is the commitment and cooperation of the far-flung countries migrants cross—long before extinction is a threat. As Wilcove writes, “protecting the abundance of migration is key to protecting the glory of migration.” No Way Home offers powerful inspiration to preserve those glorious journeys.

David S. Wilcove is the author of The Condor’s Shadow: The Loss and Recovery of Wildlife in America (Freeman, 1999), and numerous scientific and popular articles on wildlife conservation. One of the world’s leading experts on endangered species, he is professor of ecology, evolutionary biology, and public affairs at Princeton University.