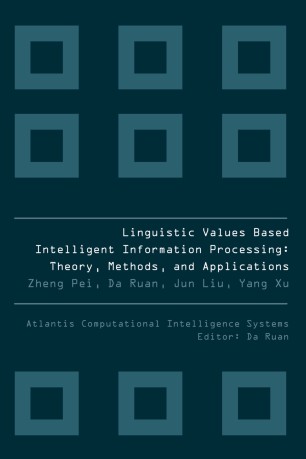 Humans employ mostly natural languages in describing and representing problems, c- puting and reasoning, arriving at ?nal conclusions described similarly as words in a natural language or as the form of mental perceptions. To make machines imitate humans’ mental activities, the key point in terms of machine intelligence is to process uncertain information by means of natural languages with vague and imprecise concepts. Zadeh (1996a) proposed a concept of Computing with Words (CWW) to model and c- pute with linguistic descriptions that are propositions drawn from a natural language. CWW, followed the concept of linguistic variables (Zadeh, 1975a,b) and fuzzy sets (Zadeh, 1965), has been developed intensively and opened several new vast research ?elds as well as applied in various areas, particularly in the area of arti?cial intelligence. Zadeh (1997, 2005) emphasized that the core conceptions in CWW are linguistic variables and fuzzy logic (or approximate reasoning). In a linguistic variable, each linguistic value is explained by a fuzzy set (also called semantics of the linguistic value), its membership function is de?ned on the universe of discourse of the linguistic variable. By fuzzy sets, linguistic information or statements are quanti?ed by membership functions, and infor- tion propagation is performed by approximate reasoning. The use of linguistic variables implies processes of CWW such as their fusion, aggregation, and comparison. Different computational approaches in the literature addressed those processes (Wang, 2001; Zadeh and Kacprzyk, 1999a, b). Membership functions are generally at the core of many fuzzy-set theories based CWW.