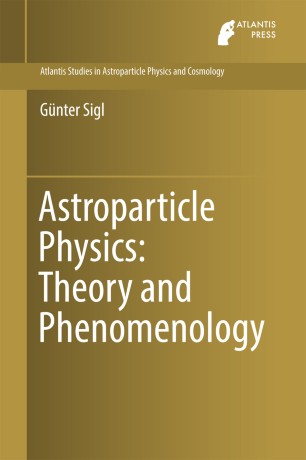 This books aims at giving an overview over theoretical and phenomenological aspects of particle astrophysics and particle cosmology. To be of interest for both students and researchers in neighboring fields of physics, it keeps a balance between well established foundations that will not significantly change in the future and a more in-depth treatment of selected subfields in which significant new developments have been taking place recently. These include high energy particle astrophysics, such as cosmic high energy neutrinos, the interplay between detection techniques of dark matter in the laboratory and in high energy cosmic radiation, axion-like particles, and relics of the early Universe such as primordial magnetic fields and gravitational waves. It also contains exercises and thus will be suitable for both introductory and advanced courses in astroparticle physics.

“The book presents a fairly complete overview of what is currently known about elementary particles of astronomic origin, both experimentally and theoretically. … For the applied mathematician, the book can serve as a reference work, but maybe even more so as an incentive to research since it states many open questions and problems pertaining to this new branch of particle physics.” (Reinhard Redlinger, Mathematical Reviews, December, 2017)
Buy options