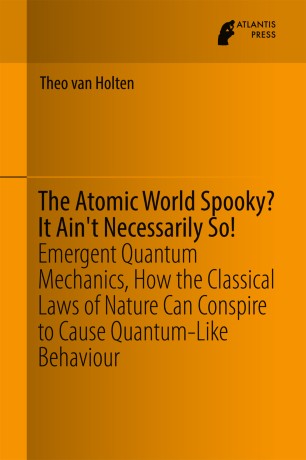 The Atomic World Spooky? It Ain't Necessarily So!

Emergent Quantum Mechanics, How the Classical Laws of Nature Can Conspire to Cause Quantum-Like Behaviour

The present book takes the discovery that quantum-like behaviour is not solely reserved to atomic particles one step further. If electrons are modelled as vibrating droplets instead of the usually assumed point objects, and if the classical laws of nature are applied, then exactly  the same behaviour  as in quantum  theory is found, quantitatively correct! The world of atoms is strange and quantum mechanics, the theory of this world, is almost magic. Or is it? Tiny droplets of oil bouncing round on a fluid surface can also mimic the world of quantum mechanics. For the layman - for whom the main part of this book is written - this is good news. If the everyday laws of nature can conspire to show up quantum-like phenomena, there is hope to form mental pictures how the atomic world works.
The book is almost formula-free, and explains everything by using many sketches and diagrams. The mathematical derivations underlying the main text are kept separate in a -peer reviewed - appendix.
The author, a retired professor of Flight Mechanics and Propulsion at the Delft University of Technology, chose to publish his findings in this mixed popular and scientific form, because he found that interested laymen more often than professional physicists feel the need to form visualisations of quantum phenomena.