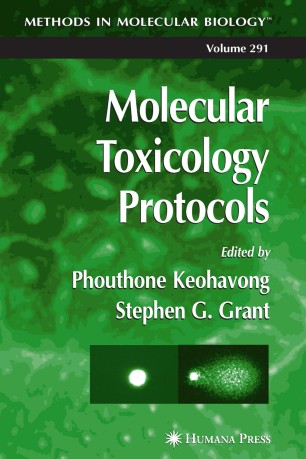 New state-of-the-art molecular techniques promise to transform the field of genetic toxicology by making it possible to directly detect genotoxic exposures and their consequences in humans, to identify the agent(s) involved, and to clinically manage the exposed population. In Molecular Toxicology Protocols, researchers from prominent universities and cancer centers around the world describe in detail their best techniques for analyzing genotoxic exposure and the resulting biological effects, including intermediate biomarkers such as DNA and chromosomal damage, mutations in reporter and oncogenes, and the earliest possible detection of cancer. The authors emphasize analytical methods specifically developed for use in human populations and in cancer patients, or in other in vivo systems such as transgenic mice. Among the applications detailed are the analysis of interactions of chemical and physical agents with cellular macromolecules, especially DNA, the assessment of medically relevant toxicity, and the individualized characterization of genetic damage and repair. There are also methods to assess and characterize the modulation of this damage and repair through individual differences in specific and genome-wide gene expression, including metabolic profiling and apoptotic capacity. These methods mark a shift in emphasis from studies of the agents themselves to the exposed population, and from studies of small populations with significant known exposures to a single agent, to studies of common diseases, such as breast cancer, caused by normal levels of generalized genotoxic exposure. The protocols follow the successful Methods in Molecular Biology™ series format, each offering step-by-step laboratory instructions, an introduction outlining the principle behind the technique, lists of the necessary equipment and reagents, and tips on troubleshooting and avoiding known pitfalls.
Comprehensive and highly practical, Molecular Toxicology Protocols offers a gold-standard collection of cutting-edge techniques designed to investigate a broad range of exposures-endogenous, accidental, medical, environmental, and occupational-and their role in human carcinogenesis and other diseases of aging.