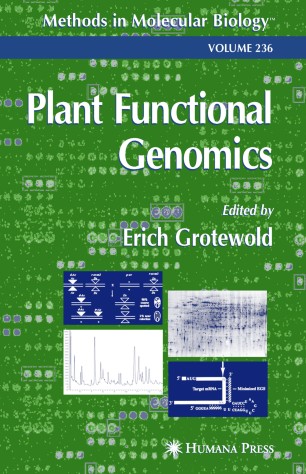 As more and more plant genomes are sequenced, plant researchers have been inundated with an avalanche of novel methodologies to identify the function of tens of thousands of plant genes. In Plant Functional Genomics, Erich Grotewold has assembled a team of leading plant scientists to describe in detail the most commonly used methods for investigating plant gene function in a wide variety of plants, during plant pathogen interactions, and even in algae. These readily reproducible protocols include computational, molecular, and genetic methodologies designed for both general and specific problems. Here the reader will learn how to identify genes in complex systems that have large genomes, few cells, and mixed cell systems. Readers will also learn the use of powerful computational and statistical tools to help predict gene function, either on the basis of comparative genomics, or from the analysis of complex genome sequences. Because establishing gene function relies on the identification of phenotypes, the authors expand the concept of phenotypes, including the use of multiple outputs as the ultimate phenotypic result of changes in gene activity. Numerous loss-of-function and gain-of-function techniques for discovering gene function are presented in step-by-step detail.
Comprehensive and highly practical, Plant Functional Genomics offers plant biologists readily reproducible computational, molecular, and genetic protocols, powerful tools that will enable them, with little or no experience, successfully to investigate any gene function with the most recent methodologies.