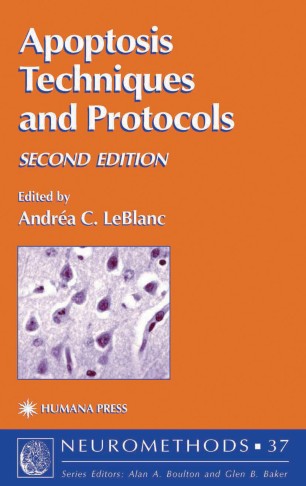 The study of the apoptotic process has grown exponentially since the publication of the first edition of Apoptosis Techniques and Protocols for the Neuromethods series in 1997. In this greatly updated second edition, seasoned experts describe in step-by-step detail their best state-of-the-art techniques for studying neuronal cell death. These readily reproducible methods solve a wide variety of research problems, including the detection of the key proteins involved in neuronal apoptosis (Bax protein, cytochrome-c, and caspases), the direct assessment of the role of pro-apoptotic proteins in neurons by viral infections and microinjections, and the detection of proapoptotic proteins in situ. There are also hands-on methods for the study of apoptosis mechanisms in neuronal compartments, for studying synaptosis, and for establishing gene expression profiles in neurodegenerative brain tissues by using DNA microarrays. Written by investigators who have used the techniques extensively, each protocol includes tips on avoiding pitfalls, notes on the method's advantages and disadvantages, and a critical survey of the literature.
Cutting-edge and highly practical, Apoptosis Techniques and Protocols, Second Edition, offers both novice and seasoned investigators a rich panoply of the productive tools they need to unravel the molecular mechanisms of neuronal cell death.