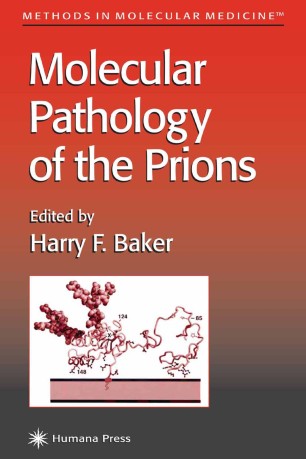 Molecular Pathology of the Prions

It is now widely agreed that the prion protein plays a key role in the molecular pathogenesis of prion diseases-diseases that involve the misfolding of proteins-in both humans and animals. In Molecular Pathology of the Prions, noted prion researcher Harry Baker has asked internationally recognized investigators to review the latest developments in, and novel approaches to, understanding the prion protein and prion diseases at the molecular level. Utilizing a variety of cutting-edge techniques, these distinguished scientists seek to define the normal function of a prion protein, to detect and measure the early immune response to prion disease, and to discover possible therapeutic targets. They also use transgenic mice and new electrophysiological investigations to elucidate the pathogenetic mechanisms involved in prion diseases. Other topics addressed include the neuronal death that occurs in prion disease, the different strains of prion disease agents, and the accumulation of protein deposits within brain parenchyma.
State-of-the-art and richly insightful, Molecular Pathology of the Prions captures for basic and clinical neuropathologists the latest developments and approaches to understanding the pathogenesis of prion diseases, including research techniques now likely to enjoy broader application for the more common proteinopathies, such as Alzheimer's and Parkinson's diseases.