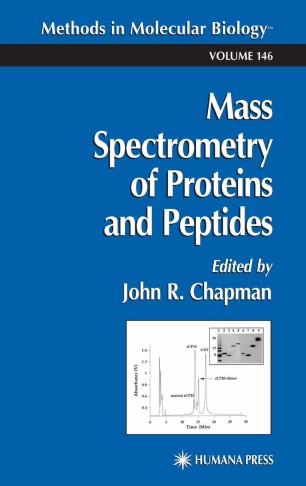 Mass Spectrometry of Proteins and Peptides

Mass Spectrometry of Proteins and Peptides

New types of mass spectrometric instrumentation and new ionization techniques have dramatically extended the applicability of mass spectrometry to the analysis of proteins and peptides. In Mass Spectrometry of Proteins and Peptides, John R. Chapman recreates the success of his earlier acclaimed book (Protein and Peptide Analysis by Mass Spectrometry, 1996) with a major new collection of cutting-edge methods in this area. Contributed by well-established investigators, each chapter provides background information before guiding the researcher step-by-step through the experimental process, with detailed instructions to help assure experimental success. The applications covered range widely and include protein sequencing, higher-order structure determination, epitope mapping, kinetics, quantitation, glycosylation analysis, and bacterial typing.
Authoritative and eminently practical, Mass Spectrometry of Proteins and Peptides demonstrates the full scope of this versatile analytical technique. All protein chemists and biochemists, as well as bioanalytical scientists, who want to exploit these powerful methods in their work, will find this book indispensable.

"John Chapman has followed on from his excellent earlier volume 'Protein and Peptide Analysis by Mass Spectrometry' by bringing together in this both very readable and informative volume 27 individual chapters from acknowledged practitioners of the application of mass spectrometry to peptides and proteins. Each chapter is packed with real information both for the biologist and mass spectroscopist and contains a wealth of detail on sample reparation and the subsequent interpretation of the MS results. ...The 'hot' topics of the investigation of non-covalent complexes, protein-protein interactions and higher order protein structures by mass spectrometry are addressed in separate chapters. Any laboratory working on peptides and proteins whether they use MS or not should have access to this book. It is a goldmine."-European Peptide Society Newsletter

"...a well crafted book using the experience of respected pioneers of modern mass spectrometric methods....Many of the methods used in proteomic studies rely on mass spectrometric analysis of proteins and peptides, as well as protein separation technology. The latter is dealt with to some extent by this volume; however, the mass spectrometric aspects are very well covered....This volume shows the great versatility of mass spectrometric analysis, in this case related to protein and peptides, indicating that most analytical challenges can be met by the technique, especially when combined with innovative sample preparation. For the clinical biochemist with an interest in proteins and peptides, this volume is an important reference. For other biochemists it represents a view of a great potential, which will develop as our use of the human genome information progresses."-Annals of Clinical Biochemistry

"The availability of a compilation of authoritative reviews that include a wealth of practical detail regarding sample preparation and presentation as well as instrument operation is both timely and of considerable value. In total there are some twenty-seven comprehensive descriptions of mass spectrometric analyses of proteins, peptides and mixtures of various complexity and provenance. The elucidation of higher-order structure is described as well as primary sequence determination, epitope mapping and cell typing using several substrates from highly refined isolates to more complex mixtures and whole cells. The contributions are provided by over sixty well established researchers and include detailed information for sample isolation and preparation as well as a comprehensive bibliography on each topic area. Further information is collated into a series of appendices covering an abbreviation glossary, listings of mass/abundance values for elements, amino acids and monosaccharide residues and a literature update on protein mass spectrometry for 1997 - 1998. This volume is a valuable addition to the series: it is comprehensive in terms of the range of applications considered and extensive in the descriptions of the analytical process. It is unusual among reviews of mass spectrometric applications for the wealth of experimental detail provided an this aspect alone makes it an essential item for every biological mass spectrometry and proteomics laboratory." - Chromatographia
Buy options