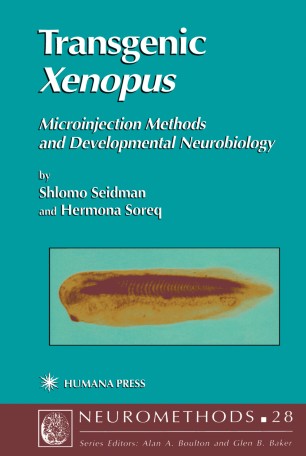 The need to better understand the molecular, b- chemical, and cellular processes by which a developing neuronal system unfolds has led to the development of a unique set of experimental tools and organisms. Special emphasis was devoted to allowing us access, at the ear- est stages, to the genomic basis underlying the system’s ultimate complexity, as exhibited once its structures are fully formed. Yet, nerve cells are anatomically, physiolo- cally, and biochemically diverse. The multitude of d- tinctly different routes for their development thus makes the developing nervous system especially intriguing for molecular neurobiologists. In particular, the demands of modern molecular neuroscience call for the establishment of efficient yet versatile systems for studying these c- plex processes. Transgenic embryos of the frog Xenopus laevis offer an excellent system for approaching neuroscientific issues. Insertion of foreign genes is performed simply, by mic- injection under binocular observation; hundreds of in vitro-fertilized embryos can be microinjected in one experiment. Embryos develop in tap water, at room t- perature, and within a few days become independent swimming tadpoles with fully functioning neuromus- lar systems. Being relatively small, these organisms are amenable to detailed analyses at the levels of mRNA, protein, and cell. Their rapid development permits the study of morphogenetic processes involved in early development, such as myogenesis and neural induction, as well as those involved in organogenesis and formation of the brain, the musculature, and the interconnections between them. Foreign DNA remains predominantly extrachromosomal.