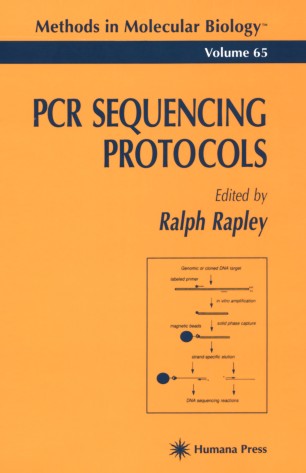 Advances in bioscience research usually arise as a result of the continu­ ing refinement of existing technologies. However, there are a number of occa­ sions v^rhere newly developed methodologies have a profound effect on nearly all areas of research. Frequently these are techniques that are elegantly simple in concept and require minimal technical manipulation. Two of these revolu­ tionary techniques are the focus ofPCR Sequencing Protocols. The first such technique is enzymatic chain termination sequencing developed by Sanger and his co-workers in Cambridge and reported in 1977. This essentially brought the possibility of deriving nucleotide sequence information in a very short time scale and has been widely accepted in many laboratories as a routine molecular biological research tool. Furthermore, it has not only led to the sequencing of many genes and gene fragments, but has also allowed the tech­ nical means of sequencing the human genome. The second technique that has found widespread acceptance in basic applied research and many routine applications is the polymerase chain reac­ tion. This technique, first reported in 1985 by MuUis and his colleagues, pro­ vides the means to amplify nucleic acid sequence, which immediately proved invaluable in nearly all fields of biological laboratory research. Here, as with enzymatic DNA sequencing, is a very simple concept that relies on minimal information to prepare short oligonucleotide primers that direct the synthesis of a specified fi-agment o f DNA in the presence of a thermostable DNA polymerase.