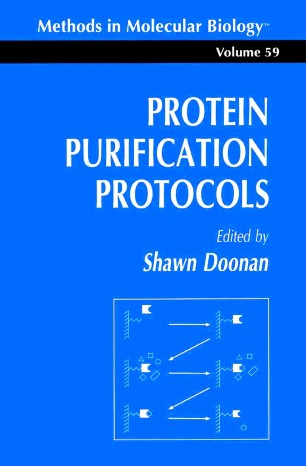 Hans Neurath has written that this is the second golden era of enzymology {Protein Science [1994], vol. 3, pp. 1734—1739); he could with justice have been more general and referred to the second golden age of protein chemistry. The last two decades have seen enormous advances in our understanding of the structures and functions of pro­ teins arising on the one hand from improvements and developments in analytical techniques {see the companion volume, Basic Protein and Peptide Protocols, in this series) and on the other hand from the tech­ nologies of molecular genetics. Far from turning the focus away from protein science, the ability to isolate, analyze, and express genes has increased interest in proteins as gene products. Hence, many laborato­ ries are now getting involved in protein isolation for the first time, either as an essential adjunct to their work in molecular genetics or because of a curiosity to know more about the products of the genes that they have been studying. Protein Purification Protocols is aimed mainly at these newcom­ ers to protein purification, but it is hoped that it will also be of value to established practitioners who may find here techniques that they have not tried, but which might well be most applicable in their work. With the exception mainly of the first and last chapters, the format of the contributions to the present book conform to the established format of the Methods in Molecular Biology series.