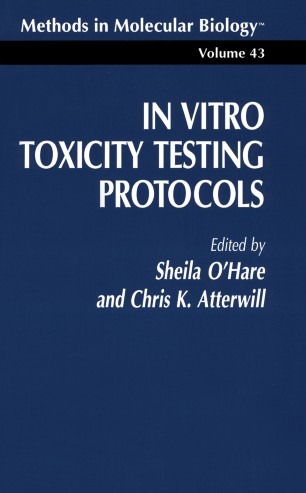 In vitro toxicology is one of the most rapidly expanding areas of biological research today. It is generally conceded that this is a result of pressure from the public for safer products and environmental conditions and, in these recessionary times, pressure from company accountants, who often perceive in vitro experimentation as a cheaper option than lawsuits, fines, and expensive remediation. Toxicologists themselves form one group whose vigor and influence on the evolution of in vitro toxicology is often underestimated. Many toxicologists have for some time been unhappy with the quantity (often a result of unnecessary duplication), the reliability, and the ethical circumstances of much animal experimentation. It is hoped that the present book, In Vitro Toxicity Testing Protocols, will play some part in enabling and encouraging the more widespread use of in vitro techniques. Since in vitro toxicity testing methodology is evolving at such a rapid rate, this book can of necessity provide only a "snapshot" of the major techniques in use at the present time. As with the other publications in Humana Press' Methods in Molecular Biology series, the aim has been to supply information on the fundamental requirements for the establishment of new techniques within working laboratories and to describe a variety of basic in vitro methodologies. Certain of the techniques detailed here could more accurately be described as ex vivo rather than truly in vitro. No apology is made for the inclusion of these techniques.