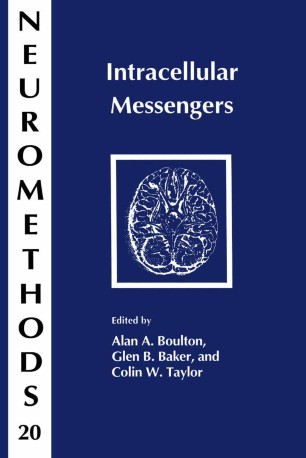 Despite the success of earlier Neuromethads volumes, I was initially reluctant to edit a further volume because my own - search is concerned with nonneural tissues. I changed my mind for two simple reasons. First, though the sheer diversity of ext- cellular signal molecules is staggering, still more impressive is the remarkably small number of transmembrane signaling processes they recruit- their receptors either have integral ion channels or enzyme activities, or else they catalytically activate G proteins. Likewise, when we look to the final intracellular t- gets of these signaling pathways, they are stucturally diverse, but again there are common themes: the response may either be the gating of an ion channel, or else the phosphorylation of a target protein. Such conservation of signaling mechanisms is both impressive and convenient, and provides my justification for asking authors with interests in diverse tissues to contribute their methodological expertise to this volume. Second, I think it would be difficult to overestimate the extent to which our understanding of intracellular signaling has been transformed by new and improved methodology. Thus, simple methods for measuring inositol phosphates have revealed the profound and widespread importance of the ph- phoinositide pathways, the techniques of contemporary - lecular biology have provided unrivaled opportunities to relate structure and function, and the complex spatial and t- poral characteristics of intracellular signaling pathways were barely imaginable before the introduction of fluorescent indi- tors and single cell-imaging technology.