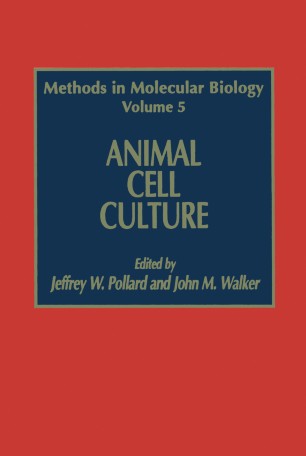 For many years I performed tissue culture in large scientific insti- tions that had a great deal of infrastructure. When I set up a tissue l- oratory outside such an infrastructure, however, I found there was a shortage of easily accessible information about the basic needs, reagents, and techniques for establishing such a facility. Much had to be done by trial and error or gleaned from originalpapers. Consequently, I felt that a methods book covering a wide variety of techniques from basic culture to the most sophisticated cell analysis would be a very valuable addition to the scientific literature. In the interim, several useful books (listed in Chapter I of this volume) did appear, but none entirely fitted the bill and some are now somewhat dated. Then, in 1984, the first of the Methods in Molecular Biology volumes from Humana Press was published with its step-by-step recipe approach. This format appealed to me, and so I c- tacted John Walker, the series editor, about including cell culture in this series. The result was that we embarked upon a single volume covering both plant and animal cell culture. Such was the richness of the material that this project soon divided itself into separate volumes on animal cell (Volume 5) and plant cell (Volume 6) culture. In this volume (Volume 5), therefore, we have aimed to describe a variety of basic techniques and culture conditions for a range of cell types.