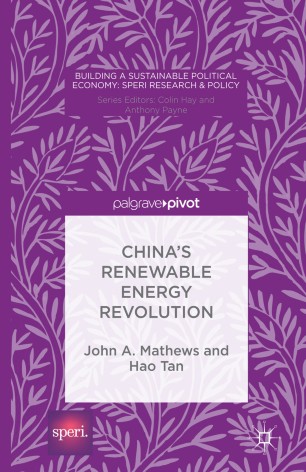 The authors suggest that China's renewable energy system, the largest in the world, will quickly supersede the black energy system that has powered the country's rapid rise as workshop of the world and for reasons that have more to do with fixing environmental pollution and enhancing energy security than with curbing carbon emissions.

John A. Mathews is Professor of Management Strategy at the Graduate School of Management, Macquarie University, Australia. From 2009 to 2012 he concurrently held the Eni Chair of Competitive Dynamics and Global Strategy
at LUISS Guido Carli University in Rome. He is a leading scholar of catch-up industrialization of East Asian countries, and now applies these insights to China's industrialization and green growth strategies.

'John Mathews and Hao Tan, the leading specialists on China's transformational energy policy, have written an authoritative book assessing the prospects of China's green energy revolution. As the world number one consumer of coal and producer of greenhouse gases moves to become the premier producer of renewable energy, and as its coal consumption continues its planned drop, much depends on the outcome. The question is whether the great reversal can occur in time to forestall disaster for China and the world.' -Professor Mark Selden, Cornell University, USA and Editor, The Asia-Pacific Journal

'This is the definitive account of China's renewable energy strategies, making full use of the idea that China's energy security is being ensured by its build-up of renewable manufacturing industries and extensive utilization of the technologies involved, where its strategies can be viewed as latecomer or catch-up strategies of the 21st century.' -Professor Mei-Chih Hu, National Tsinghua University, Hsinchu, Taiwan