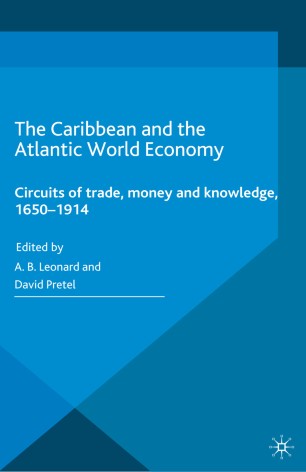 The Caribbean and the Atlantic World Economy

This collection of essays explores the inter-imperial connections between British, Spanish, Dutch, and French Caribbean colonies, and the 'Old World' countries which founded them. Grounded in primary archival research, the thirteen contributors focus on the ways that participants in the Atlantic World economy transcended imperial boundaries.

David Pretel is Post-doctoral Research Fellow in Economic History at University Pompeu Fabra in Barcelona, Spain, where he lectures in the history of economic thought. Previously he was Max Weber Postdoctoral Fellow in History at European University Institute in Florence, Italy. He specialises in economic history, historical political economy, and the history of technology.

Adrian Leonard is Post-doctoral Researcher at the Centre for Financial History, University of Cambridge, UK. He has written widely on topics related to marine insurance and the Atlantic World. He is co-editor of the series The Atlantic World 1400-1850 (2014), and of Questioning Credible Commitment (2013).