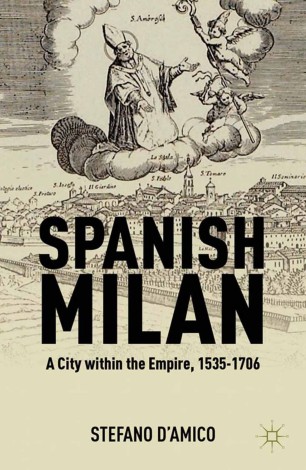 This book provides a broad overview of the main features of Spanish Milan and their transformations during the 16th and 17th centuries. At the same time, it addresses an important and long-lasting historiographical debate that traditionally interpreted the Spanish period as one of decline for Italian cities in general and Milan in particular.

Stefano D Amico is an associate professor of History at Texas Tech University.

"Painstakingly researched, meticulously documented, but still remarkably readable and well-written, D'Amico's book is able to show that there was marked continuity between the Spanish and the 14th-15t-century Visconti and Sforza families' ability to mediate feudal, urban, and rural jurisdictions. Highly recommended." - CHOICE

"Stefano D'Amico's Spanish Milan is an extraordinarily documented and extremely polished piece of work. There is no comprehensive work of such depth of analysis, breadth of detail, and synthetic clarity on the early modern city of Milan during the Spanish period in English. Both his original research and his synthetic overview from secondary sources places D'Amico's book at the cutting edge of current scholarship on the social and economic conditions in early modern Italy. This book is a master work that will broaden Anglophone knowledge of one of the major cities of early modern Italy, the early modern Spanish Empire, and early modern Europe." - John A. Marino, University of California San Diego

"Stefano D'Amico's book is groundbreaking. His skillful mastery of untapped sources and vast literature allows D'Amico to create a vivid 'biography' of Spanish Milan, where patronage, religious bonds, corporative links, and financial ties replace the traditional cast. Debunking long-held claims, D'Amico demonstrates with cogent arguments how the web of informal relations - entwined with both the Monarchy and the Holy See - ensured resilience and vitality to the Lombard city during the Austrian Age and beyond. This is social and economic history at its best. Spanish Milan: A City within the Empire, 1535-1706 will become a milestone in early modern Italian history." - Giuseppe De Luca, University of Milan