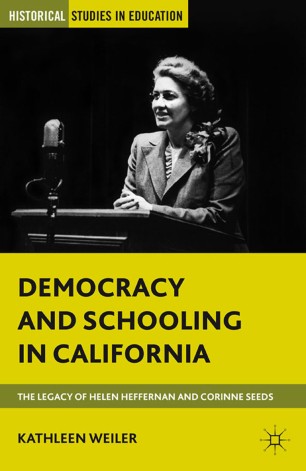 Democracy and Schooling in California

The Legacy of Helen Heffernan and Corinne Seeds

Part of the Historical Studies in Education book series (HSE)

This book examines the struggle over public education in mid-twentieth century America through the lens of a joint biography of these two extraordinary women, Heffernan, the California Commissioner of Rural and Elementary Education between 1926 and 1965, and Seeds, the Director of the University Elementary school at UCLA between 1925 and 1957.

Kathleen Weiler is a professor in the Department of Education at Tufts University.

“Weiler’s extensive archival research offers an insider’s view into the battles that educators waged to keep progressive education in California’s schools. It reveals the difficulties of female educators in securing prominent administrative jobs within their profession and brings to light the intimate relationship between Heffernan and Seeds. … This well-argued and well-written book will have wide appeal to historians of the twentieth century, feminism, and education, and to anyone interested in a fascinating story.” (Judith H. Raftery, Journal of American History, Vol. 103 (1), June, 2016)

"Kathleen Weiler's Democracy and Schooling in California is a crowning achievement for this distinguished scholar who has written some of the most significant books over the past quarter century in feminist educational theory, practice, and activism. In this work, Weiler spins an impeccably crafted, yet provocative historical analysis of the intertwined lives and works of two powerful women educators of the Progressive Era, Helen Heffernan and Corinne Seeds. I am left with a transformed understanding of how it is that California's public schools came to be among the nation's finest by mid-twentieth century." - Jackie M. Blount, The Ohio State University

"Together, Corrine Seeds and Helen Heffernan helped lead the campaign that made California's schools a model for the nation of democratic education. Combining a profound engagement with social theory and exemplary empirical research, Kathleen Weiler's terrific account of the couple and the network of educators with whom they worked illuminates how schools come to protect or challenge gender, class and racial domination. Democracy and Schooling in California is history that speaks to our most pressing questions." - Daniel Perlstein, University of California, Berkeley