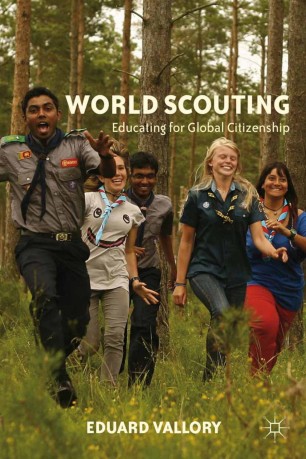 In a very comprehensible and entertaining way explores the main findings of the first academic research on world scouting, the largest young movement on the planet. The work revisits scouting's origins, analyzing its structure and recognition policy, its role in developing ideas of global citizenship and belonging, and the spirit of scouting.

Eduard Vallory is Visiting Scholar at New York University. He has previously been Director of the Barcelona Graduate School of Economics and International Commissioner of Catalan Scouting.

"Written in a very exciting style that will make you want to keep reading till the end, this book explains the main findings of a prior academic research on World Scouting that was accomplished earlier by the same author as part of his doctoral research. Using new data and a storytelling technique, the current work revisits how Scouting started, showing its informal launching and its historical evolution throughout the twentieth century. The book analyzes Scouting's structure and recognition policy, its role in developing ideas of global citizenship and belonging, and the spirit of Scouting." - World Scout Bureau

"I have just finished reading Eduard Vallory's excellent new book. It is quite possibly the best discourse on World Scouting and non-formal education I have ever had the good fortune to read. He combines a forensic exploration of the Movement's roots and history with a fascinating examination of some of the thorny issues with which we all grapple today, as Scouting

claims its position as the world's most influential membership organisation for young people. Vallory's style, whilst uncompromising in its academic rigour, is highly readable for a reader who normally prefers 'doing' Scouting to studying it. It is essential reading for anyone who seeks to understand Scouting and its educational mission." - John May, Vice-Chairman of the World Scout Committee and the Secretary General of the Duke of Edinburgh's International Award for Young People

"The twenty-first century could aptly be termed the century of learning and teaching in that those will be the definitive social processes to determine the fate of humanity as we face growing environmental, political, demographic, or economic global challenges. Education has been deeply rethought around the world with greater emphasis on the long-term outcomes of education, on learning in context in order to emphasize the development of skills, of practical know how, in addition to the developm

ent of academic knowledge. There is also growing awareness of the importance of developing civic identity, character, individual agency, and responsibility. This book is a fascinating account of how the World Scout Movement has addressed these issues over the last century. In an engaging historical and sociological analysis, Vallory examines how this global movement of nonformal education wrestled with the tensions between shaping civic identity in ways that carefully negotiated the commitment and loyalty to local, national, and global communities. This book is a must-read for anyone interested in understanding how social movements and voluntary organizations can successfully contribute to preparing our youth to develop some of the competencies that will most matter to their ability to take charge of their future." - Fernando Reimers, Ford Foundation Professor of International Education, Harvard Graduate School of Education

"The research which Eduard Vallory has produced is not just exceptional, it is unique, because it is the first ever written academic study on World Scouting, both in its origin, evolution, and globality. This book thus fills a great void. It should become a landmark in the 'history of education' as it demonstrates how the world's largest and oldest youth movement has contributed and still contributes to structuring the personality of yesterday's and today's youth towards a most needed local and global citizenship." - Dr. Jacques Moreillon, Secretary General of the World Organization of the Scout Movement (1988-2004), former Director General of the International Committee of the Red Cross

"This book shows that the diversity of the Scout movement makes it one of the biggest multicultural and multidenominational world networks for education and joint action with young people. In addition, Vallory also unveils how Scouting values of peace, tolerance, and solidarity shape responsible individuals into global citizens with critical thinking skills and a commitment to human rights individuals who are willing to make a change anywhere they find injustice. Today, when the transition from a culture of imposition, violence, and war to a culture of dialogue, conciliation, and peace is more urgent than ever, the everyday behaviour guided by these values can become crucial for the emancipation of a humanity 'relieved from fear and misery', as enshrined in the Preamble of the Universal Declaration." - Federico Mayor Zaragoza, Director-General of the UNESCO (1987-1999); Chairman of the Foundation for a Culture of Peace

"This concise and informative volume proves that scouting can be a serious academic subject, revealing much about changing societal values in an increasingly globalized world. While an informative and useful read for scholars of youth or educational movements, Vallory's well-researched work will also be appreciated by anyone who has experienced firsthand the "magic" of scouting." - The Journal of the History of Childhood and Youth