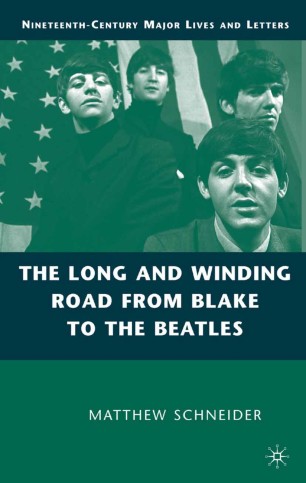 This book traces the musical and cultural achievements of this contemporary musical phenomenon to its origin in the Romantic revolution of the 1790's in England when traditional concepts of literature, politics, education and social relationships were challenged as they were in the 1960's.

"His book's best bits trace how the credo of romanticism via Coleridge and Wordsworth had uncanny but explainable parallels in the counterculture of the 1960's, and, most convincingly, in the persons of Beatles Lennon and McCartney....Schneider's wide-ranging and diligently researched book does more: it also accounts for the quasi-religious, mythological, ideaological dimensions of the Beatles." - Times Colonist

"Schneider does not fear the risky but intriguing claim that Wordsworth is 'the great grandfather of country music.' This, then, is the line that takes us from late 18th-century Britain to the New World present, and it is the Beatles who carry these two-way transatlantic genetics. Schneider s wide-ranging and diligently researched book does more: it also accounts for the quasi-religious, mythological, ideological dimensions of the Beatles; it points to the importance of competition between John and Paul; it gives an archetypal reading of Ringo Starr and a Byronic account of George Harrison; it moves easily, and sometimes ingeniously, among Robbie Burns, Hank Williams, Johnny Cash and Lewis Carroll. Best of all, though, Schneider speaks knowingly and passionately about the singular place of the Beatles in our ears and in our eyes." - The Vancouver Sun

"Schneider (Chapman Univ.) compares the Beatles, and the 'rock romantic revolution,' to the seminal Romantic poets. John Lennon is to S. T. Coleridge what Paul McCartney is to William Wordsworth; George Harrison's 'poetic identity' is Lord Byron, Ringo Starr's is William Blake - and Schneider filters this all through Lewis Carroll. His argument is interesting and valid, as he proves with lyrical comparisons. He demonstrates a connection between Robert Burns's ballads and those from Appalachia, which in turn inspired the Carter Family, whose style impactedcountry music and later southern rockabilly and blues music. As the music was reimported to English skiffle bands, the influence of the Romantic poets continued. Lennon and McCartney, in particular, heard the predisposition of the lyrical works and continued the subconscious impact through the Beatles' music and lyrics. In elucidating the yin-yang rapport of the musical influences in the Beatles' lives, Schneider offers readers a comprehensive understanding of the group's still-resonating music and politics." - Choice