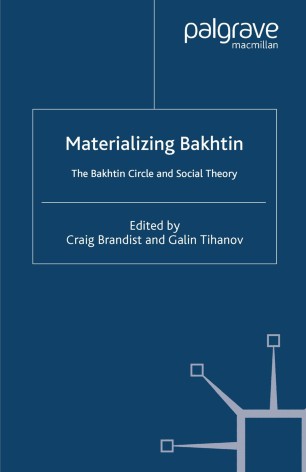 The Bakhtin Circle and Social Theory

This volume brings together nine essays by established and new scholars from Russia, Britain and North America to explore the historical contexts and current relevance of the work of the Bakhtin Circle for social theory, philosophy, history and linguistics.

CRAIG BRANDIST is HRB Research Fellow at the Bakhtin Centre and Department of Russian and Slavonic Studies at Sheffield University. He is the author of Carnival Culture and the Soviet Modernist Novel and of numerous articles on the Bakhtin Circle, Russian literature and culture and intellectual history. He is currently working on a translation and critical electronic edition of the works of the Bakhtin Circle and a new critical introduction to their work.

GALIN TIHANOV works in the Department of European Languages and Cultures, Lancaster University. He holds doctorates from Sofia University and the University of Oxford and is the author of two books on Bulgarian literature, articles on comparative literature and the history of ideas, and a forthcoming book on Bakhtin and Lukács.