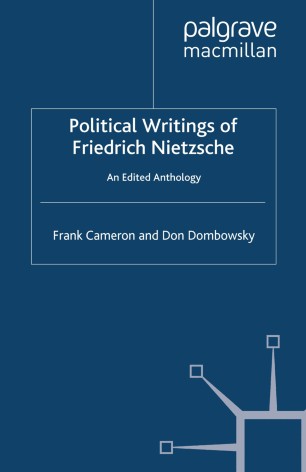 Political Writings of Friedrich Nietzsche is an anthology that gathers together, for the first time, the political commentary and writings found throughout Nietzsche's corpus. Included is an historical introduction which demonstrates that Nietzsche was an observer of and responded to the political events which defined the Bismarckian era.


FRANK CAMERON teaches Political Theory at Wilfrid Laurier University, Canada. He is the author of Nietzsche and the 'Problem' of Morality.

DON DOMBOWSKY lectures in Philosophy at Bishop's University, Canada. He is the author of Neitzsche's Machiavellian Politics and has published articles in the Journal of Nietzsche Studies and Nietzsche-Studien.

'At a moment when Friedrich Nietzsche's writings have returned to the forefront of much recent political thought, and interest in his ideas has grown rapidly on both sides of the Atlantic, this timely new edition of Nietzsche's political writings is a major contribution to our understanding of one of the most influential post-Enlightenment philosophers. Covering Nietzsche's political writings and statements almost in their entirety from his early years as a pupil and student to his later genealogy of morality this volume situates the development of Nietzsche's political ideas in their proper historical context. Moreover, Frank Cameron and Don Dombowsky have done an excellent job at correcting the still widely-held view of Nietzsche as an anti-political cultural aesthete or literary aphorist. In the writings collected in this volume we see Nietzsche deeply interested in a critical understanding of the modern state, the affairs of civil society, the possible pitfalls of democracy, and the projects of Empire that marked nineteenth-century Europe. Nietzsche's responses to the rule of Napoleon Bonaparte and the fall of Napoleon III, British liberalism, Bismarck's authoritarian Germany, and the rise of anti-Semitism provide many valuable lessons for contemporary political philosophy indeed, they show how current debates about the future of democracy and civil society continue to be shaped by problems that first emerged in the nineteenth century.' Christian J. Emden, Rice University, USA

'With this comprehensive selection of texts, Frank Cameron and Don Dombowsky have made an important contribution to our understanding of the political dimensions in Nietzsche's philosophy. Especially the little known juvenilia and excerpts from the (still untranslated) Nachlaß throw new light on Nietzsche's continuous preoccupation with the national and the social question. In a very substantial introduction, the editors set these writings in their historical contexts and offer a powerful challenge to the still widely held belief that Nietzsche was an 'unpolitical' thinker.' - Martin A. Ruehl, University of Cambridge, UK.