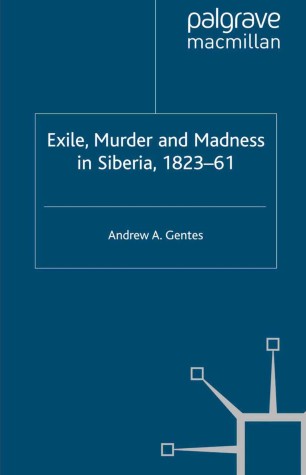 Despite reports of exile proving disastrous to the region, 300,000 Russian subjects, from political dissidents to the elderly and mentally disabled, were deported to Siberia from 1823-61. Their stories of physical and psychological suffering, heroism and personal resurrection, are recounted in this compelling history of tsarist Siberian exile.

ANDREW A. GENTES holds graduate degrees from the University of California-Riverside and Brown University, USA, has taught in the United States, China, and Australia, and held research positions at the George Kennan Institute, Hokkaido University's Slavic Research Center, and Library of Congress's John W. Kluge Center. He is the author of Exile to Siberia, 1590-1822 (Palgrave, 2008) and translator of Russia's Penal Colony in the Far East: A Translation of Vlas Doroshevich's 'Sakhalin' (Anthem Press, 2009).

'Andrew Gentes' emerging history of Siberia is a major contribution to the study of Eurasia.' - Abbott Gleason, Brown University, USA

'Gentes employs a distinction between sovereign power and governmentality to explore the Russian system of Siberian exile in the decades preceding the Great Reforms. Treating exile and resettlement as mechanisms of labour mobilization and societal purification, he delivers a harsh and convincing critique of tsarist administration. Readable and carefully researched, his book will be welcomed by historians of serfdom, judicial institutions, penology, state and empire building, and thanks to the treatment of political exiles such as the Decembrists, Polish rebels, and Petrashevtsy, by students of Russian opposition movements.' - Elise Kimerling Wirtschafter, California State Polytechnic University, USA