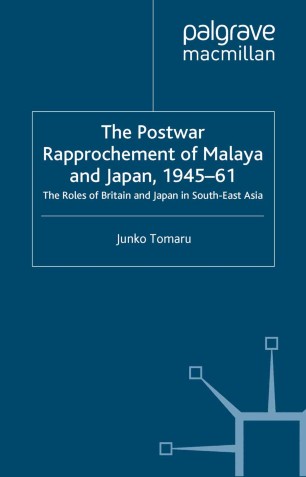 The Postwar Rapprochement of Malaya and Japan, 1945–61

The Roles of Britain and Japan in South-East Asia

The author analyses the development of postwar Malayo-Japanese rapprochement from the resumption of unofficial economic relations to establishment of formal diplomatic relations, which happened along with the return of British administration in Malaya and Malayan decolonisation. The focus is placed on the role of Britain as the suzerain of Malaya, in facilitating Japanese return to Malaya. The motivations behind the keen promotion of rapprochement by Malayan and Japanese leaders through the exchange of Prime Ministerial visits are also closely discussed.

JUNKO TOMARU is Associate Professor in Transnational Relations at the Graduate School of International Cooperation Studies, Kobe University, Japan. She obtained her M.Litt. and D.Phil degrees from Oxford, St Antony's College, returning there as Senior Associate Member for a new research project. Her interests range from international migration and resultant ethnic politics in former British colonies in Asia-Pacific to the roles of Britain and Japan in postwar South-East Asia.

'...Tomaru's arguments are clear and well supported by data from an array of Western and Asian sources.' - American Historical Review

'...meticulously documented study...makes effective use of archival material in Britain...What emerges is considerably more complicated and revealing than explanations which portray Japan's re-entry into South-East Asia after the Asian-Pacific War as a Cold War strategy imposed on the region by the United States.' - Dr Ann Waswo, Nissan Institute of Japanese Studies, Oxford

'That Japan has close economic (if low-key political) relations with the countries of Southeast Asia is taken for granted today. Too few scholars, however, have studied in depth the historical background to these relationships. In the case of what is now peninsular Malaysia, economic interaction with Japan was already vigorous well before the Asian-Pacific War. In this masterly study, Dr Junko Tomaru gives a meticulous and balanced analysis of how these relations developed from the pre-war Japanese exploitation of rubber and iron ore, through the traumas of war and occupation, into the decade of the 1950's, leading ultimately to the ending of British colonial rule. She expertly dissects the trilateral relations between Malaya, Britain and Japan up to 1961. These involved local anger at Japanese wartime atrocities (mixed with a sense of the economic attractiveness of Japan), British concern with protection of its own industries against Japanese inroads, and a Japanese desire to re-establish its economic presence. These complex elements were played out against a gathering trend for Southeast Asians to turn towards the East and away from the West.' - J.A.A. Stockwin, Nissan Professor of Modern Japanese Studies, University of Oxford