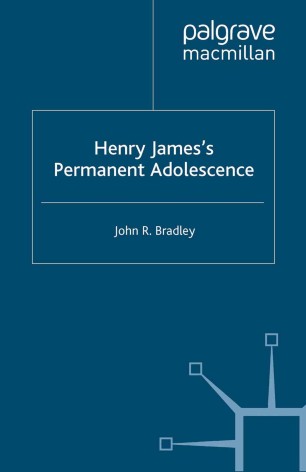 Henry James remained throughout his life focused on his boyhood and early manhood, and correspondingly on younger boys and men, and John R. Bradley illustrates how it is in the context of such narcissism that James consistently dealt with male desire in his fiction. He also traces a more subtle but related trajectory in James's writing from a Classical to a Modernist gay discourse, which in turn is shown to have been paralleled by a shift in James's fiction from naturalistic beginnings to later stylistic evasion and obscurity. This radical book, which covers the whole of James's career, will quickly be recognized as a defining text in this emerging field of James studies.

JOHN R. BRADLEY was educated at University College London, Dartmouth College and Exeter College, Oxford. He was editor of the London Quarterly (1994-97) and has contributed essays and reviews to many newspapers and journals in Britain and the United States. He has edited two collections of essays: Henry James and Homo-Erotic Desire (1999) and Henry James on the Stage and Screen (2000).

`Henry James's Permanent Adolescence is an important addition to the critical reconsideration of Henry James's fictional representations of gender and sexuality. John R. Bradley's notion of 'permanent adolescence' helps us understand James's relationship to his art in the wider context of late-Victorian aestheticism and Decadence, with a particular focus on Walter Pater, John Addington Symonds and Oscar Wilde. Carefully interpreting representative works from each major period is James's career, Bradley offers us a new perspective on how James's art developed in conjunction with his changing views on sexuality'. - Professor John Carlos Rowe, University of California, Irvine

'Bradley writes with admirable lucidity and a companionable briskness...his book...(is) a judicious and, at times, illuminating study of James as a 'gay' artist.' - James Friel, Liverpool John Moores University

'Henry James's Permanent Adolescence is a valuable and well-written contribution to the on-going debate on James's fiction.' - English Language Teaching