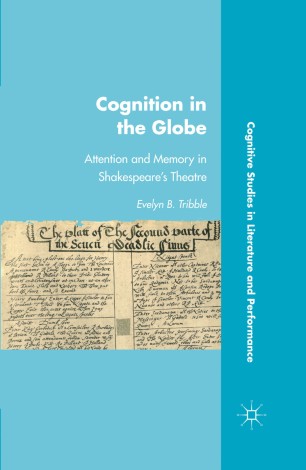 Cognition in the Globe

Attention and Memory in Shakespeare’s Theatre

Early modern playing companies performed up to six different plays a week and mounted new plays frequently. This book seeks to answer a seemingly simple question: how did they do it? Drawing upon work in philosophy and the cognitive sciences, it proposes that the cognitive work of theatre is distributed across body, brain, and world.

EVELYN TRIBBLE Professor of English at the University of Otago, New Zealand. She is the author of Writing Material: Readings from Plato to the Digital Age (with Anne Trubek) and Margins and Marginality: The Printed Page in Early Modern England.

"In this enthralling work, Tribble defends the view that much of human memory is made possible not only by the biological brain but also by the distributed webs of scaffolding structures with which we populate our worlds. Initiating a unique dialogue between the sciences of mind and the study of the early modern theatre, Tribble pursues her quest through a wealth of fascinating examples. Theatre, and the mind, may never look the same again." - Andy Clark, Professor of Logic and Metaphysics, University of Edinburgh; author of Supersizing the Mind: Embodiment, Action, and Cognitive Extension"The most important book to be published on the performance practices of early modern adult playing companies in England since Bernard Beckerman s Shakespeare at the Globe in 1962. Tribble tackles the complex skills required by a professional company that mounts several dozen plays in a season, incorporating apprentices as well as one-day hires, moving to different stages, and fitting new scripts by a variety of playwrights to their company personnel. Focusing on the mnemonic load of such a craft, Tribble finds distributed cognition to be the player s most valuable aid." - Roslyn L. Knutson, Professor of English, Emerita, University of Arkansas - Little Rock"If you think cognitive psychology concerns only what goes on in individual heads, think again. Cognition in the Globe takes account of space, time, physical objects, and (most importantly) what is going on in other people's heads. The result is a startlingly fresh take on how Shakespeare and his fellows managed to put on six different plays a week, all the while adding new plays to their repertory." - Bruce R. Smith, Dean s Professor of English, University of Southern California