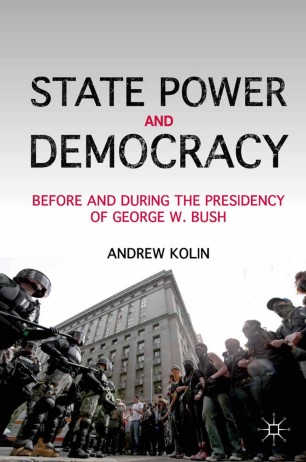 Before and During the Presidency of George W. Bush

State Power and Democracy is the first book to show that the Bush police state didn't commence when Bush was inaugurated. It proves, instead, that the seeds of an American police state can be traced all the way back to the founding of the republic.

ANDREW KOLIN is a Professor of Political Science at Hilbert College, USA.

"Since the tragic events of 9/11, the United States has gutted its democratic ideals in the name of security while increasing its authoritarian tendencies as part of the war on terror. State Power and Democracy not only rigorously takes note of how the Bush administration (and increasingly the Obama government) undermined any promise of a democracy in the United States but also vividly illustrates the long trajectory of authoritarian practices and punishing policies that have been deeply ingrained in American history. Andrew Kolin provides both a powerful warning and a wake-up call about the death of democratic ideals in the United States." - Henry Giroux, Chair, English and Cultural Studies, McMaster University and author of Hearts of Darkness: Torturing Children in the War on Terror

"Andrew Kolin exposes the persistent efforts of autocrats to suppress popular democracy. His treatment is wide-ranging, historically informed, and most relevant to the police-state transgressions occurring in today's America." - Michael Parenti, author of God and His Demons and Contrary Notions

"This compelling book traces the assault on democracy and the rise of a police state that reached its zenith in the George W. Bush administration. From the war on communism to the war on terrorism, our government has used surveillance, preventive detention, torture, and a climate of fear to consolidate its power and neutralize dissent. Under the guise of nurturing democracy at home and abroad, the U.S. government has actually undermined it. Required reading for all who seek to recapture our democracy." - Marjorie Cohn, Professor, Firedoglake.com