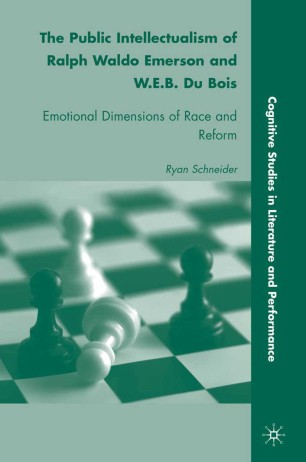 Emotional Dimensions of Race and Reform

In the first in-depth study of the emotional dimensions of Du Bois's and Emerson's writings on public intellectualism, reform, and race, Schneider offers a valuable and eloquent contribution to the critical tradition.

"Both Emersonians and Du Boisians will be deeply engaged by Schneider s innovative arguments about the understudied interconnections between these two figures. Schneider s analysis of emotion and intellect - or more precisely, how affect interfaces with cognition - emerges organically out of his close readings of the work of each thinker, and he demonstrates, often to arresting effect, the centrality of feeling in their reform writings. This accessible, penetrating study will appeal to people in a variety of fields - literature, history, philosophy, sociology, and American Studies - and is a must-read for anyone interested in questions of race, affect and cognition, and social reform." - Dana Nelson, Gertrude Conaway Vanderbilt Professor of English and American Studies, Vanderbilt University and author of The Word in Black and White and National Manhood

"By viewing the intertwined emotional and intellectual development of Emerson and Du Bois through the lens of double consciousness, Schneider opens up striking new ways to understand the connections between these major figures, each one arguably the most important reform-minded public intellectual of his day." - Eric J. Sundquist, Foundation Professor of Literature, UCLA

"A carefully researched, inventive, and compelling study of two towering figures in American intellectual history. Rather than opt for a conventional charting of influence, or diachronic trend lines, Schneider takes the more fruitful path of selective concentrated analysis of comparable experiences, interests, and motions of the mind in order to dramatize a complex mix of affinities and discrepancies across the color line. Especially revealing is his demonstration of the intertwinement of emotion and intellect to the public intellectual work of these two notoriously cerebral thinkers." - Lawrence Buell, Harvard University and author of Emerson